Aaron Finch and David Hussey were the previous Player of the Tournament winners of the BBL.

Hobart Hurricanes opener Ben Dunk has capped off a stellar Twenty20 Big Bash League (BBL) season to be named Player of the Tournament.

Dunk’s power-hitting has lifted his Hurricanes into Tuesday’s semi-final against the Stars at the MCG, including striking a winning 50 from 20 balls against former BBL champions the Heat in December to record the BBL’s fastest half-century.

The Player of the Tournament is awarded to the player who received the most votes from umpires at the end of the 32-match regular season. After each match, both umpires cast individual 3-2-1 votes.

BBL Player of the Tournament Votes: 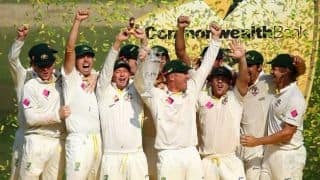