Dunk signed up for Hawkbills while Shah will be with the Tallawahs.

The Caribbean Premier League (CPL) announced that rising Australian star Ben Dunk and former England batsman Owais Shah will be a part of the T20 extravaganza in the West Indies.

Recently, it was announced that New Zealand’s rising star Jimmy Neesham former captain Daniel Vettori will make their services available for the tournament.England international, Owais Shah, will link up with defending champions, Jamaica Tallawahs, while Dunk, Player of the Tournament in this year’s Big Bash League, will bring his big hitting to the Antigua Hawksbills.

CPL Cricket Operations Director, Michael Hall, said: “It goes to show the strength of the Caribbean Premier League that we are able to draft in such talented and popular replacements for those who are now unavailable. It is a tournament that is on the lips of every cricketer in the world at the moment, and although international commitments and injuries have taken their toll, we are always confident of having plenty of talented cricketers ready and willing to step in.” 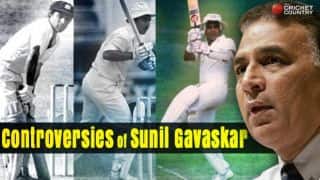 Sunil Gavaskar: 13 controversies which the Little Master was involved in