England all-rounder Ben Stokes is expecting to regain full fitness before a four-match Test series against Pakistan, which begins on July 14.

London: England all-rounder Ben Stokes, who underwent a successful surgery for a cartilage tear in his left knee, is expecting to regain full fitness before a four-match Test series against Pakistan, which begins on July 14. According to the Mirror, the 24-year-old will receive his rehabilitation schedule on Wednesday and should be back in business for the opening Test at Lord’s. Stokes failed to recover from the injury sustained during the opening match of the three-Test series against Sri Lanka at Headingley. He was forced to spend the majority of the second innings off the field having treatment. Stokes devastated to miss SL series following knee surgery

The second Test against Angelo Mathews’ side at Chester-le-Street which begins on Friday will be the first that Stokes has missed since being recalled against West Indies early in 2015. Meanwhile, bowling all-rounder Chris Woakes has been called in to replace Stokes in the squad. England are leading the three-match series 1-0 after defeating Sri Lanka by an innings and 88 runs inside three days in the first Test in Leeds. Stokes undergoes knee surgery, Topley sidelined for 3 months

Ben Stokes has said he is “devastated” to miss out on the rest of the ongoing Test cricket series against Sri Lanka after undergoing a knee operation. The 24-year-old has been sidelined for six weeks. He injured himself while bowling in the first Test which England won quite convincingly by an innings and 88 runs. Stokes suffered a cartilage tear that he says has been “an ongoing issue for two to three years” but which he has “managed to play through until now”, reported the BBC on Tuesday. “I am devastated,” he said. Bowlers David Willey (small abdominal muscle tear), Mark Wood (left ankle surgery) and Reece Topley (partial stress fracture of the lumbar spine) are also set to miss the tie. Stokes will miss the remaining two Tests, five One-Day Internationals and T20 international against Sri Lanka, reported IANS. 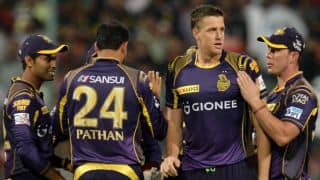