England batsman Ben Stokes played a matured innings under pressure to reach to his maiden Test ton on Day Five.

England batsman Ben Stokes played a matured innings under pressure to reach to his maiden Test ton on Day Five of the third Ashes Test at Perth. Stokes defied the fiery Australian pacers and the unsettling cracks in the pitch to reach to his hundred. Stokes becomes the first Englishman on tour to hit a hundred. Stokes got to his ton with a pull shot that brushed past him behind the keeper for a boundary.

Stokes came in to bat in the last session of the fourth day and put on an impressive 99-run partnership with Ian Bell (60) to delay Australia’s victory.

As the play progressed to the fifth day, Australian pacers came hard at Stokes and Matt Prior. Even the cracks on the pitch started playing tantrums. One ball from Ryan Harris drifted six degrees away after hitting a crack. But Stokes remained unperturbed and played a beautiful innings under pressure.

Stokes was also not afraid to go for his pull strokes against short deliveries which has been a major reason for the downfall of England batsmen this series. 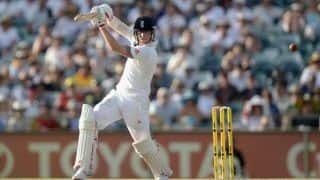 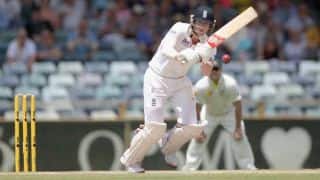