Stokes will have to appear at the court on February 13 to clear the charges on him.

After given permission to resume playing for England, emotional Ben Stokes let his sentiments flow via his social media accounts. Stokes missed The Ashes 2017-18 following a spat with a stranger outside a pub that subsequently banned him from playing cricket. He was later cleared of the charges and allowed to join his national side. Stokes will have to appear at the court on February 13 to clear the charges on him, which will in turn provide him a chance to play in the T20I tri-series between Australia, England and New Zealand.

This is what Stokes tweeted on Wednesday:

Representing my country is one of the greatest things that I’ve ever been lucky enough to do, walking out on to the field with the England shirt on is a privilege and a honour.
Im extremely delighted to be given this opportunity to do this again….1/2

“Following a full Board discussion, in which all considerations were taken into account, the ECB Board has agreed that Ben Stokes should now be considered for England selection. Given the CPS decision to charge him and two others with affray, confirmation of his intention to contest the charge and the potential length of time to trial, the Board agreed that it would not be fair, reasonable or proportionate for Ben Stokes to remain unavailable for a further indeterminate period,” England and Wales Cricket Board (ECB) had earlier said in a statement for media. 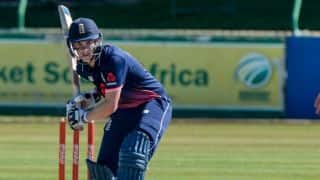