Hosts Bengal will bank on their spin resources when they face a spirited Delhi in a must-win Ranji Trophy group B fixture beginning at Eden Gardens from Sunday.

Hosts Bengal will bank on their spin resources when they face a spirited Delhi in a must-win Ranji Trophy group B fixture beginning at Eden Gardens from Sunday.

Bengal are placed fourth with 16 points, while Delhi (13) have climbed to seventh place after their nine-wicket win over Madhya Pradesh in the previous round.

With five teams from a combined group A and B set to make the quarters, it’s a must-win match for both teams to keep their hopes alive.

Unlike in the past when they used to put out green top, Bengal have opted for a turning track this time, possibly to negate the effect of Delhi pace duo of Navdeep Saini and Kulwant Kejroliya who gave them nightmares last season.

The duo shared 13 wickets between them in two innings, as Delhi eliminated Bengal from the semifinals with an innings and 26 runs victory in Pune.

The loss will be fresh in their minds as Bengal have reinforced their spin attack roping in uncapped leg-spinner Prayas Ray Barman who made headlines in the IPL auctions after being signed up by Royal Challengers Bangalore for a whopping Rs 1.5 crore.

The 16-year-old, who was playing for Bengal in the U-19 Cooch Behar Trophy, was drafted in ahead of the match. The youngsters may be set for a debut and bowl alongside offspinner Aamir Gani on Sunday.

Skipper Manoj Tiwary remained tight-lipped but said they would go with two-spin option. “We wanted to go all out with a rank turner. But in present scenario, I think you would not need a third spinner. Two will be enough I suppose,” he said.

Visibly unhappy with the pitch on offer, Tiwary said they wanted a rank-tuner but the pitch might not assist spin both ways. “Frankly speaking, it’s not the type of spinning track we wanted,” he said citing the example of Saurashtra’s 87-run win over Karnataka on a rank-turner in Rajkot.

“We have seen it live on TV… It was pure rank-turner the way they (Saurashtra) wanted. We would have liked a completely dry pitch. In the present situation, it seems there will be spin from one end and it will help the seamers from the other end. Let’s hope for the best. We will go with the mindset to fight for six points rather than being dependent too much on the pitch.”

Bengal will hope their batting will click especially that of Sudip Chatterjee who has been terribly out of form and has been shuffled in the batting order.

Chatterjee made 47 in the second innings against Andhra and the Bengal skipper hoped he would make it big at the Eden.

Bengal conceded a first innings lead in their thrilling draw against Andhra.

Having conceded the lead, Bengal made a sporting declaration, setting Andhra a target of 203. Andhra finished on 170/7 to take home three points.

Bengal’s batting will have to be watchful of Delhi left-arm spinner Vikas Mishra who claimed a match haul of 12 wickets to bowl them to a nine-wicket win over Madhya Pradesh.

Delhi’s batting may have been depleted with the retirement of Gautam Gambhir but young wicketkeeper batsman Anuj Rawat showed promise with a maiden first class hundred in the last match.

Nitish Rana is back at the helm as skipper after doing national duty in the Emerging Cup and it will be a homecoming of sorts for him since he plays for Kolkata Knight Riders.

Delhi coach Mithun Manhas said they have a full strength side now after missing a few players in the last few matches. “We have had our share of ups and downs. Most of our players were either playing for U-23 or India A. We had the full strength in the last game and we got the result,” Manhas said.

While Bengal will play back-to-back home matches to conclude their league campaign, Delhi’s bid to make the quarterfinal is stiffer as they have to win successive away games with their last league match in Tamil Nadu.

Manhas said they were confident to make the knockouts despite falling behind. “Delhi have always played cricket to win. We are confident of making the quarters,” he said. 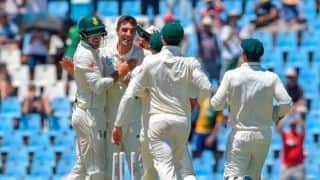 It would be stupid to not make tracks that assist our seam bowlers: Faf du Plessis