Bhuvneshwar Kumar brought up a match-winning performance with the ball, as he became the joint cheapest Indian bowler in the 4-over spell.

India fast bowler Bhuvneshwar Kumar brought up a match-winning performance with the ball, as he became the joint cheapest Indian bowler in the four-over spell in a Twenty20 Inetrnational (T20I) during the match against United Arab Emirates (UAE) in the ongoing Asia Cup T20 2016 at the Shere Bangla National Stadium in Mirpur, Dhaka on Thursday. He bowled four overz, and managed to give away just eight runs, and claiming a couple of wicket, which is the second best by an Indian, and precedes Ravichandran Ashwin on the top spot. He is followed by Ravindra Jadeja and himself in the third and fourth spot, respectively. Full Cricket Scorecard: India vs UAE, Asia Cup T20 2016 Match 9 at Dhaka

India kept up the pressure and soon they picked up the wicket of Rohan Mustafa for 11. Shaiman Anwar was the only one to put up some fight for India, but he soon ran out of partners. Anwar was eventually run out in the last over for 43.  Pawan Negi came onto bowl his first over in international cricket in the 13th over. Despite conceding 10 overs off it, he managed to pick up the wicket of Muhammad Usman. Harbhajan Singh, Hardik Pandya and Yuvraj Singh too were among the wickets. Full Updates: India vs UAE, Asia Cup T20 2016 Match 9 at Dhaka

Dhawan had not faced more than four deliveries in the series before this match. He however hung on till the end and will have some runs under his belt going into the final. Rohit was dismissed after a hit a majestic 39 and Yuvraj Singh made his way to the crease at No. 3 and finished with an unbeaten 25.

India break no sweat as they beat United Arab Emirates (UAE) by nine wickets in Match 9 of the Asia Cup T20 2016 match at Dhaka. Rohit Sharma and Shikhar Dhawan did not look in much of trouble through their innings as they manage to knock off the 82 runs required to win the match. 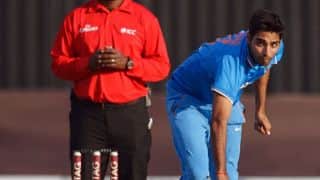