Bhuvneshwar claimed a fifer in this game, which was also his first in India and was certainly ecstatic about it.

The second Test between India and New Zealand once again saw many twists and turns as Day 2 comes to an end. After getting bowled out for 316, the onus was on India to dismantle New Zealand as early as possible and take a healthy lead. With the pitch not assisting the spinners massively, like it did in the previous game, Indian pacers had to step up and chip early wickets, which they did. New Zealand top-order once again collapsed as Bhuvneshwar Kumar and Mohammed Shami drew early blood. Bhuvneshwar got the ball to move and left the Kiwi batsmen bewildered with his accuracy and control.

Bhuvneshwar claimed a fifer in this game, which was also his first in India and was certainly ecstatic about it. He had the prized scalps of Martin Guptill, Henry Nicholls, Ross Taylor, Mitchell Santner and Matt Henry to his name. The wicket of Taylor was also termed as his best in the post-match presentation. Bhuvneshwar wrecked havoc as soon as game resumed after rains and was also on a hat-trick at one stage. There was pace, there was swing and there was some exquisite control by Bhuvneshwar as he made the utmost use of the overcast conditions. His spell was a delight to watch and Eden Gardens certainly witnessed on the most epic bowling moments by Bhuvneshwar.

Twitter went berserk on the way Bhuvneshwar put in the hard yards and heaped praise on him. Check out some of the best tweets from the micro blogging site here:

It’s been ages since an Indian pacer took a five wicket haul in an innings on Indian pitches,Mental discipline pays of for Bhuvneshwar kumar Varun Rachapudi (@RachapudiVarun) October 1, 2016

Yet another surgical strike… this time by Bhuvneshwar Kumar. #2ndTest #indvsnz

-Get Dropped For No Reason

Bhuvneshwar Kumar has almost won this match for India . India will remain the no 1 test team in the world . #indvsnz

New Zealand are now precariously placed at 128 for the loss of seven wickets and India will eye to get rid of the tail as early as possible on Day 3. 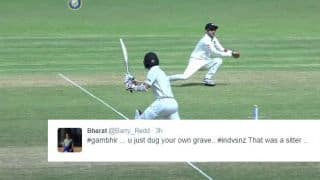 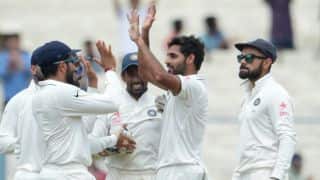