Making peace with the fact that his Australia career is behind him is a big reason for Steve O’Keefe‘s successful Big Bash League (BBL) season for Sydney Sixers, whom he hopes to help into Sunday’s final.

The left-arm spinner, capped nine times in Tests and seven in T20Is, is the fourth-highest wicket-taker in the BBL with 19 at 18.21 apiece. His form has been critical for Sixers making the final four – they meet Melbourne Stars on Friday in the semi-finals – and now that he has stopped worrying about making Australia’s team, O’Keefe has put in his best BBL season ever. (READ MORE: Smith, Cummins prep Sydney Sixers for semi-final showdown)

“(Last year) I was probably worried more about four-day cricket and Test cricket because for me, that was sort of the pinnacle,” he told reporters in Melbourne. “I think this year I’ve had much more focus on (knowing) in the twilight years of my career, this is what I am going to play and that dream of playing for Australia might be over.

“I’ve put all my energies and focus into playing it and I think as soon as you block out that other white noise and just focus on that game that’s coming up in front of you, it’s tended to have better results.”

In 2017, after being recalled to Australia’s Test team, O’Keefe claimed 6/35 against India in a famous overseas victory in Pune. O Keefe snared six wickets for five runs in 24 balls as India lost their last seven wickets for 11 runs in less than eight overs. O Keefe s figures in that spell read 4.1-1-5-6.

O’Keefe was a member of Sydney Sixer’s BBL title run in 2011 and hopes to repeat the success.

“We’d love to win it,” he said. “One thing that drives us, or me in particular, is that each time our team comes out, we’re last with the bookies.

“I think that was one of the first questions we got asked when we played the Scorchers (in the 2011-12 final). To make the top four is a bit of a feather in our cap but no one really remembers who finishes second, third or fourth. It’s all about who’s won it and how many you’ve won.” 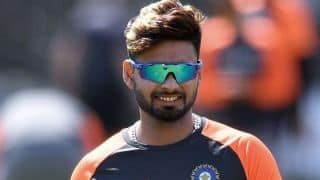