Pacer James Pattinson, who made a comeback to competitive cricket after undergoing back surgery November 2017, has been ruled out of the remainder for the Big Bash League suffering a side strain in Brisbane Heat s eight-wicket loss to Melbourne Renegades at the Gabba on Thursday.

According to cricket.com.au, Scans yesterday confirmed the injury and Pattinson has travelled with the Heat to Melbourne for their return clash with the Renegades tomorrow in Geelong.

The right-armer has bowled with express pace in his comeback season after undergoing back surgery November 2017.

Pattinson played five matches for Brisbane taking four wickets and prior to the BBL he played four JLT Sheffield Shield games for Victoria claiming nine wickets at an average 33.

Pattinson played the last of his 17 Tests in February 2016, against New Zealand.

With 5 for 27 in his debut Test against New Zealand, Pattinson, then 21, had announced himself on the world stage and such was the talent and potential shown from the Victorian that it did not take pundits long to call him the next big thing in Australian cricket.

Fast forward to 2018, Pattinson now 28, has only 17 Test and 15 ODIs to his name. Once heralded as the fearsome bowler alongside another up and coming quick Pat Cummins, Pattinson is on the road to recovery and on a road back to the international since, literally from the brink.

While a spate of injuries pushed Pattinson in the what-could-have-been category, the 28-year-old, after a major back surgery, was once again up and running and the one thing that had fuelled his need to wear the baggy green, was the Ashes.

My big goal is playing the Ashes in England, Pattinson had told cricket.com.au in October last year. That s the main reason I had the surgery. I was almost going to walk away from the game. My life was all over the shop. I didn t know what I wanted. I got as low as I ve been in terms of life and cricket. 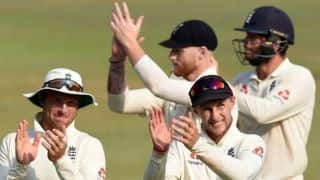