Rashid found solace from his teammates, the Adelaide crowd and his Afghanistan teammate Mohammad Nabi, who plays for the Renegades.

Rashid Khan has decided to see out the entire season of the Big Bash League despite the loss of his father back home in Afghanistan. The legspinner, playing for Adelaide Strikers, revealed that his extended family has urged him to play the remaining games of the season. Rashid was earlier supposed to head back home after playing Thursday s match against the Melbourne Renegades.

“It was tough. I lost my Dad, the one who is very close to us and to my family,” Rashid told reporters. “He really supported us – he struggled a lot while giving up (a lot) with how he (raised) us. He was always watching my games, he didn’t understand cricket a lot but he just was always asking my family how I had done.

“It happens. It’s life. In this situation, my family has really supported me Especially my mum, my brothers, my nephews. They were encouraging me a lot from back home.

The Strikers have an eight-day gap after January 13 and Rashid might consider to making a small return. Calling the whole of Australia his family, Rashid admitted it was a tough time for him, but he found solace from his teammates, the Adelaide crowd and his Afghanistan teammate Mohammad Nabi, who plays for the Renegades.

“I spoke with him (Nabi) a lot. He said ‘it’s life – someone will go, someone will come. We all will go one day. It’s not like we will be here for all of time’,” Rashid continued.

“The way the team, my captain, my coaches, my management the way they (supported) me has been great. They were in my room until late (after the New Year’s Eve game), encouraging me. I really love that that kept me alive there They were coming to me and hugging me.”

Rashid has received unparalleled support from his family, for whom he is a special influence. His young siblings admire the legspinner, one of whom is keen to come to Australia.

“My little brother, he bowls but he doesn’t like cricket that much. He wants to come to Australia, he’s always telling me, ‘please take me to Australia, I want to see Australia and watch your games there and see the crowd and the supporters’.” 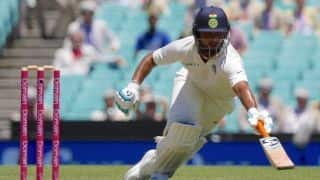