Welcome runs from Murali Vijay built on the good work done by his fellow opening partner Michael Hussey, and breezy knocks from Suresh Raina and MS Dhoni delivered the late surge to propel Chennai Super Kings to 196 against Rajasthan Royals. 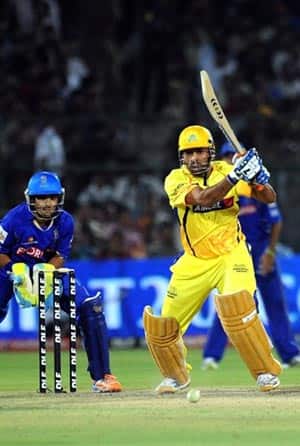 MS Dhoni clobbered 41 off 19 balls, studded with three sixes and as many boundaries. AFP

Welcome runs from Murali Vijay built on the good work done by his fellow opening partner Michael Hussey, and breezy knocks from Suresh Raina and MS Dhoni delivered the late surge to propel Chennai Super Kings to 196 against Rajasthan Royals. The final nine overs of the innings yielded 107 runs with Dhoni devastating when targeting the straight boundaries and that allowed CSK to post their highest total of the season. Shane Warne, in his final appearance in front of the home fans in Jaipur, will be feeling the pinch after deciding to insert CSK.

It was Hussey who got the ball rolling for CSK, swatting the first ball of the match for four behind square. A flowing drive sent the ball scurrying past cover, before Hussey began reverse-sweeping and bisecting backward point and third man with deft placement. With Vijay turning in another scratchy start and being reprieved on four by Ajinky Rahane at point it was up to Hussey to play aggressively and he did so well. His handiwork against short deliveries was especially sparkling, with a pull and cut off consecutive deliveries from Amit Singh standing out.

Using his feet superbly, Hussey attacked Shane Warne and Johan Botha but his aggression against spin was short-lived. Looking to slog-sweep Botha for six, he was bowled for 46 off 30 balls. By this time Vijay had found some momentum courtesy a six off Warne – and he converted a shaky start to ease past his fifty off 35 balls with another six off Siddharth Trivedi.

Two big overs, the 12th and 13th, swung the impetus firmly CSK s way and by the second strategic timeout they were firm on 140 for two and set for the final surge. A moment of complacency cost Vijay his wicket on 53, but Raina had set himself up on 33 off 21 heading into the final four overs.