Bihar U-16s won by an astonishing margin of an innings and 870 runs.

A thousand and seven is the kind of score you expect over the course of an entire three-day match, but that was precisely what Bihar Under-16s scored at Energy Stadium, Rajbanisinagar, Patna, that too for the loss of 7 wickets, scoring at 6.33 an over in the Vijay Merchant Trophy. Bihar s dominance did not end there, for their innings was sandwiched between Arunachal Pradesh s 83 and 54. This meant that they won by an astonishing margin of an innings and 870 runs. In a remarkable coincidence, they finished their rout on the 53rd anniversary of Pakistan Railways famous innings-and-851-run win over Dera Ismail Khan the biggest ever margin of victory in First-Class cricket.

Arunachal were quickly shot out in the first morning. Latyir Damin (34) provided some respectability to the total, but they generally had no answer to Reshu Raj (7 for 14). Then captain Arnav Kishor (161), wicketkeeper Binny (358), and Prakash (220) pulverised the hapless Arunachal bowlers. Binny and Prakash added 401 for the third wicket at 5.96 an over.

Anav Kishor eventually declared with a ridiculous 924-run lead. Latyir Damin again got 31, this time out of a total of 54, as Reshu Raj claimed 6 for 23. 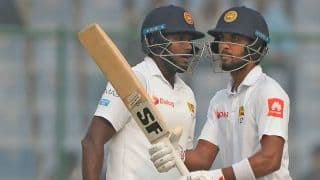