James Sutherland praised Lawry for his enormous and ongoing contribution to Australian cricket.

While most cricket fans know him as a central figure on Channel Nine’s cricket coverage, Lawry was one of Australia’s finest opening batsmen. During a 10-year career that began in 1961 Lawry played 67 Tests, scoring 5,234 runs at 47.17, with 13 centuries and a highest score of 210. The tall and angular left hander formed one of Australia’s most famous partnerships with Bob Simpson before taking over the captaincy from his fellow opener. Fittingly, Simpson was the presenter at the induction Thursday night.

While sometimes criticised for his slow scoring, fans saw a different side of Lawry when Nine became cricket broadcaster during the late 1970s. Often excited and sometimes irreverent, Lawry’s catch-cry of, “it’s all happening” has become part of the game’s lexicon in Australia. His commentary box stoushes with former England captain the late Tony Greig highlighted Lawry’s standing as a true Australian cricket patriot. Proud of his humble beginnings as a plumber from Melbourne’s northern suburbs Lawry, 77, has maintained a lifelong affection for his district club Northcote, where he began as an 11-year-old.

“Bill was one of the finest opening batsmen the game has seen and is part of an elite group who had the privilege of captaining his country. However, Bill has made just as big an impact off the field as one of the most well-known and loved cricket characters in the country through his long and fruitful association with the Nine Network,” Sutherland said.

“He has been synonymous with the game for generations of fans who have enjoyed his endless enthusiasm and insights. And while Bill is a national icon he has always maintained a strong connection with the grass roots of club cricket, where he first received his opportunity. On behalf of Cricket Australia I congratulate Bill for his induction into the Sport Australia Hall of Fame. It is a thoroughly deserved honour,” he added. 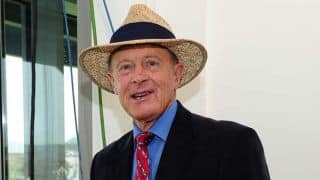