Flintoff made a good comeback, taking two wickets and scoring an unbeaten 20.

Birmingham Bears beat Lancashire Lightening by four runs in the T20 Blast Final at Edbaston on Saturday. The Lancs came very close to pulling off a huge victory, led by a sparkling innings from Karl Brown (55) and followed up by a near-matchwinning cameo from Andrew Flintoff (20* off 8) at the death.

Ashwell Prince and Tom Cooper started well, but Boyd Rankin (2/21) bowled a stifling spell that put the brakes on the Lancs innings. Oliver Hannon-Dalby (3/31) then ensured that Lancashire never quite took off. However, Brown’s quickfire half-century nearly tuned the game on its head, till a few quick wickets pegged the Lancs back.

Andrew Flintoff, batting all the way down at No 9 for some inexplicable reason, hit two sixes off the last two balls of the penultimate over to set hearts racing again, but with 14 runs needed off the final over, he could only make five runs off three balls as Chris Woakes (2/34) bowled a few tremendous yorkers to prevent any big hits.

Earlier, the Birmingham Bears scored 181 for 5 in their 20 overs against challengers Lancashire Lightening. Three innings stood out for the Bears, as first Varun Chopra and William Porterfield got them off to a flier at the start before Laurie Evans played a belter at the death to propel Birmingham.

However, the story at the start was that of former England all-rounder Andrew Flintoff, who replaced the injured Kabir Ali. “Freddie” claimed the wicket of Ian Bell off the very first delivery he bowled in a match that he was not initially going to be a part of. Flintoff made his comeback in July and claimed two wickets in his first county game since 2009 as Lancashire defeated Worcestershire in the Twenty20 Blast.

James Anderson was largely ineffective, as he was taken for as many as 41 in his first three overs before coming up with a decent final over, the 20th of the innings, mixing slower balls with yorkers to end with figures of none for 52 in his four overs. 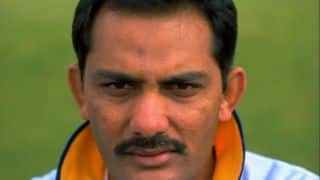