BJ Watling scores a ton during marathon partnership with McCullum.

New Zealand’s sixth wicket pair of Brendon McCullum and BJ Watling continued their marathon effort with Watling scoring his third Test century in 293 balls 421 minutes. Watling came in to bat on the third day of the Test when Corey Anderson was dismissed for just two runs with New Zealand‘s score on 94 for the loss of five wickets.

Watling was the more patient of the two just content in playing the defensive shots. Both McCullum and Watling went in to tea at 146 for five. Post the tea break, while McCullum went  for his shots, Watling still played the waiting game. He completed his half-century in 190 balls. At the same time it also brought New Zealand’s highest sixth-wicket partnership in the second innings. As the partnership went into the fourth, the duo broke the record for the highest ever partnership for New Zealand against India. Watling also completed 1,000 Test runs during this innings.

This is the longest ever Test innings played by a New Zealand wicketkeeper. The previous best was by Brendon McCullum scoring 143 against Bangladesh batting for 339 minutes. Watling has batted for over 400 minutes now. 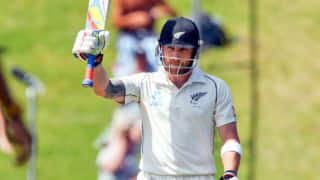