Udit Raj represents the North-West Delhi constituency and he was earlier in the news after making a bizarre statement saying that the Indians should consume beef, which is rich in protein.

Bharatiya Janata Party (BJP) MP Udit Raj is once again in the spotlight and this time he has vowed to put forward a request to the Prime Minister Narendra Modi and the Board of Control for Cricket in India (BCCI), about having Scheduled Castes (SC)/Scheduled Tribes (ST) quotas in Indian cricket. Raj represents the North-West Delhi constituency and he was earlier in the news after making a bizarre statement saying that the Indians should consume beef, which is rich in protein, following the footsteps of Usain Bolt, who is the fastest sprinter in the world currently holding the world record for 100m dash.

“Not as a BJP member, but as the national chairman of the All India Confederation of SC/ST Organizations, I am making this demand. I have been fighting for this since 20 years, but we are very serious right now. Just like the South Africa cricket team has a racial quota, we also want the same,” Udit Raj told IBTimes, India. “Through social media and action plans, we will take this movement forward. I’m writing the letter to BCCI within a week about this. There have been no preliminary talks with Anurag Thakur about this and he being a BJP member does not give us any advantage, as I have been demanding it for several years now. It is a social issue and I hope it gets fulfilled,” he added.

He further added, “If my organisation decides, we can also approach Narendra Modi on this. We want the SC/ST quota both in the IPL and the India cricket team,” Raj added.

Raj was also unfazed about the outcome of the BCCI versus Lodha case pending at the Supreme Court. “It does not concern us if the BCCI top brass is dismissed. We will write the letter to the BCCI. That’s the aim, be it whoever comes into the power.” 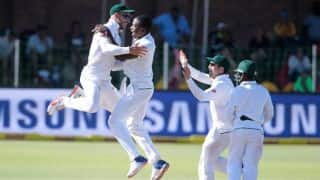