The arrival of Virender Sehwag might have triggered hopes of an Indian revival but former England captain Ian Botham says given that the dashing opener is short of match practice, even he can't stop the hosts from clinching the ongoing series 4-0. 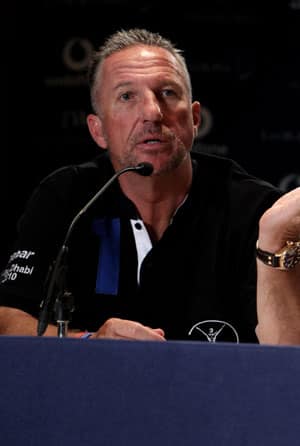 The arrival of Virender Sehwag might have triggered hopes of an Indian revival but former England captain Ian Botham says given that the dashing opener is short of match practice, even he can’t stop the hosts from clinching the ongoing series 4-0.

“I can’t see any reason why 4-0 isn’t on…what is there to stop them (England) from making it 4-0? Not a lot in my eyes, and certainly not the brittle India batting line-up they’re facing,” Botham wrote in his column for The Daily Mirror.

“The suggestion is that Virender Sehwag is going to go straight into the team with Gautam Gambhir happy to play now his bruise isn’t hurting him anymore.

“Well if they think those two will turn fortunes around on their own, then think again because in the case of Sehwag certainly, opening the batting in a Test match in England without any first-class cricket behind you in months, against this attack is anything but a walk in the park,” he added.

Botham said except for Rahul Dravid, the Indian batting has “looked fragile”.

“…only Rahul Dravid has shown the sort of fight and technique needed to be successful over here. I don’t doubt the quality of players like VVS Laxman and obviously Sachin Tendulkar, but they have only shown glimpses of what they’re capable of and like any batsman they have to produce the goods out in the middle,” he pointed out.

Botham suggested that England retain the team that won the second Test by 319 runs at Trent Bridge.

“England must take the same 11 men into battle next week to secure their rightful place as the world’s best Test cricket team. Another victory of the sort inspired by Tim Bresnan, Stuart Broad, Ian Bell and Matt Prior at Trent Bridge will do just fine and with it will come the crown that we have all been expecting for some time,” he said.

Botham said pacer Bresnan, who scored a 90 and took a five-wicket haul, should be retained even if original choice Chris Tremlett is fit.

“…I’m afraid he (Tremlett) should sit this one out because the man who replaced him in Nottingham is on fire and has done more than enough to keep the spot he has worked so hard for,” he said.

“It is the nature of sport that sometimes you get injured and someone takes your place, but you can rarely expect to just walk back into the side when you’re fit again.

“The only time that happens is when the quality of the replacement isn’t up to much or because your own track record is so good and you’ve been playing so well that you demand inclusion,” he added.