With no sunlight in sight, play was called off early as umpires called it at day at Port Elizabeth with Sri Lanka still trailing South Africa by 105 runs.

South African bowlers made life difficult for an inexperienced batting line-up of Sri Lanka to survive in the middle on Day Two of the first Test at Port Elizabeth. The day in general belonged to the bowlers from both sides as wickets kept toppling; 11 in all. South Africa s batting was guilty of getting starts and not going on to make a big score, while Sri Lanka were undone by lack of concentration by their batsmen. Bad light meant play was called off early in with 22 overs still remaining to be bowled. Sri Lanka were 181 for 7 with Dhananjaya de Silva (43*) and Dushmantha Chameera (7*) still in the middle, trailing South Africa by 105 runs.

Final session started with Kyle Abbott and Vernon Philander moving the ball both in and away from the batsmen. Abbott was unlucky not to get the wicket of de Silva as South Africa had no reviews left in their kitty. With pressure from one end, Philander struck for the home side, cleaning up Dinesh Chandimal for 28. Chandimal, who looked nervous early on, got hit on the pads to an incoming delivery. He did opt for the review that went in favor of the opposition.

De Silva was soon joined in by Rangana Herath. With the tail-enders to bat alongside, de Silva chanced his bat every once a while. As the day progressed clouds came calling in with absolutely no forecast of rain in the east coast region of South Africa.

With a fading light, Faf du Plessis brought in Keshav Maharaj to bowl much to the delight of the Sri Lankan batsmen. Herath, unfazed by the situation, continued to play his own game and went after the bowling unit.

Herath, after a quick-fire 24, perished attempting a reverse sweep off Maharaj. The ball struck on his pads on the full as Herath missed the ball completely. This was Maharaj s first wicket on home soil.

Maharaj s wicket of Herath was also the 9,999th time in the history of the game a batsman has been adjudged out leg-before.

Dushmantha Chameera came out in the middle and dead batted everything in a bid to support de Silva, who continued his resilient knock and hitting boundaries whenever a chance arrived.

With a mild cloud cover around, the umpire s decided to stop proceedings with fading light as the batsmen deemed it unfit for play. With no sunlight in sight, play was called off early as umpires called it at day at Port Elizabeth with Sri Lanka still trailing South Africa by 105 runs. 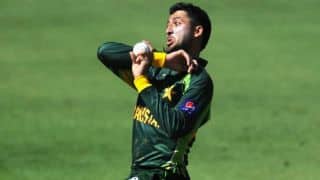 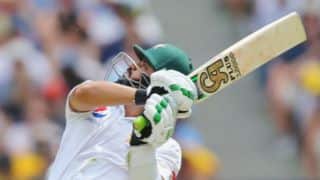