India were once again tormented by Michael Clarke and Ricky Ponting but off-spinner R Ashwin insisted there was no psychological block on his team's bowlers even though the tourists just didn't have the luck on the opening day of the fourth Test against Australia at Adelaide on Tuesday. 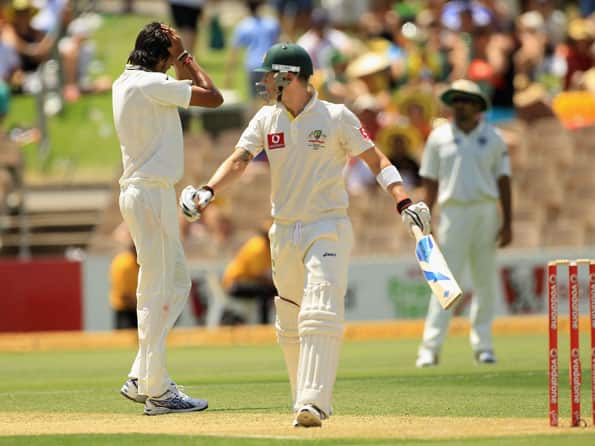 India were once again tormented by Michael Clarke and Ricky Ponting but off-spinner R Ashwin insisted there was no psychological block on his team’s bowlers even though the tourists just didn’t have the luck on the opening day of the fourth Test against Australia at Adelaide on Tuesday.

Australia ended the day 335/3, managing to recover from a shaky start, as India’s desperate hope of at least one win in the four-match series began to fizzle at the very outset.

Australia have already clinched the series by winning the previous three matches.

Both Clarke (140) and Ponting (137) are unbeaten having shared a 251-run fourth-wicket stand. The two had similarly batted India out of the match in Sydney with Clarke going on to make an unbeaten triple hundred.

Asked if the two have managed to psyche the Indian bowlers, Ashwin said it was not the case.

“I don’t think as a bowling unit we have a psychological block towards it. It has happened in two Tests, in Sydney and in Adelaide here. Probably we need to take a couple of early wickets tomorrow,” said Ashwin, who picked up two wickets in the first session.

Ashwin believed the day slipped away from India’s hands after they failed to keep lid on scoring in the second session.

“We were telling each other that we really wanted to be tight in the second session. It was very crucial. That’s where we shelled the game a little bit. We gave quite a few easy runs to them and they just took off from there. After that it was quite easy to carry on”, he said.

India’s bowling suffered on a baking hot day and there was a thought if Ishant Sharma didn’t bowl well or if India was better off with two spinners but Ashwin blamed it all on luck.

“The rub of the green hasn’t gone our way. You can’t really help it. Nicks are not going to hand. Michael Clarke was beaten on 130. It was that kind of day in the office.

“He (Sharma) could probably have a 10-wicket haul, five-wickets together, you never know,” he said.

Ashwin, recalled for this Test, was brought into operation as early as in the fourth over of the innings.

“It was a very instinctive decision (on the part of skipper Virender Sehwag) to really bring me on. He told me an over before that I was going to come on. I was really wondering what to do and what was my plan really.

“I wanted to be sure my plan was bang on place and I really wanted to execute it even if that plan was not right for that person. I wanted to be very sure what I was doing. I thought I was pretty good at executing what I had in my mind,” he said.

“It wasn’t a shock to me. I was prepared for any kind of challenge which was thrown at me. I was quite ready for it. As you know, in the last match, we didn’t have many ammunitions to throw at David Warner so when he asked me, I had my plans ready and really executed it properly,” he added.

Ashwin thought it was a blessing in disguise that India were already behind in this game and hoped the team’s batters would go out and now express themselves in the middle.

“We have nothing to lose. We are 3-0 down. It gives us a bit of a licence to be carefree about it and play natural and it could be a blessing in disguise.

“All that is required is to get those 20-30 runs and then stick it out. We have to try for those initial starts and then capitalise on it. It’s going to be crucial.”

India has been at the receiving end throughout this series but Ashwin didn’t see it as an embarrassment for his side.

“Two teams play and one loses. Nobody is embarrassed. We are quite happy to come out and keep trying again and again.

We would turn around at sometime. Nobody is embarrassed, I am quite sure about it.”

There was a moment, just before the tea break, when the Indians appealed against Michael Clarke for obstructing the field. As Clarke dashed for security at the non-striker’s end, his bat deflected the ball in the outfield and he ran for two extra runs.

“I just fielded the ball and threw down at Clarke’s end.

It was straight at the target of the stumps. It hit the bat and skidded off. We were not sure if he was running on overthrow and we just wanted to check it.

“We appealed if it was intentional and he ran for it and that’s why we appealed. After that he went to umpire and said if he could take back those two runs. He said he did it instinctively. Anybody can make mistake and it was commendable on his part to say sorry,” he said.

“As for selection of the team, these matters are best left to people who decide on it. Though taking conditions into consideration, I think three seamers was the way to go unless you are playing five bowlers.”

Ashwin opined there was no help for the bowlers on the benign Adelaide Oval.

“There’s not much spin for the day, I don’t know much about this surface too, but it was really good batting by Ricky Ponting and Michael Clarke that took the game away from us in the second session.

“There are a few seniors in the team who have already told us about how first innings pan out at Adelaide oval and how it is good for batting on the first 3-4 days and how it changes in the second innings. We are pretty confident and we have to turn up and take early wickets tomorrow.” (PTI)

I won't be retiring at the end of this series: Ricky Ponting

Virender Sehwag ready for a move down the batting order