Boyd Rankin has given hopes to Ireland just before the ICC World Twenty20 (T20) 2016, as he decides to leave England’s Test cap and join back with his home team. The 31-year-old met the Ireland team officials last week to complete his return to the national team. He has made 82 international appearances for Ireland between 2007 and 2012, including the last World Twenty20 in Bangladesh three years ago. In between, he has played seven One-Day Internationals (ODIs), two T20s and one-off Test match in Sydney for England in 2013-14. ALSO READ: Boyd Rankin’s Ashes diary: My first Test was a disaster

Rankin is following the footsteps of his Ireland team-mate, Ed Joyce, who qualified for England for World Cup 2007, but four years later was back to Irish colours in India, where he and Rankin played in the famous victory over England at Bangalore. As reported on espncricinfo.com, Rankin said, “I’m delighted to be returning to Irish cricket, where I was born and learned the game. I’ll always be grateful to England for the chance to play Test cricket, but with little opportunities in the last two years, I felt it was time to move on at this stage of my career. There’s a real opportunity for Ireland to get Test status now, and that prospect was a real lure for me – I’d love to be part of history. Before that of course there’s a T20 World Cup in India – I’ve played in three before with Ireland and it’d be great to make it four.” ALSO READ: John Mooney announces retirement from international cricket

He added, “I’ve also very happy memories of both the 2007 and 2011 50-over World Cups in the West Indies and India, and I’d like to make it a hat-trick of appearances in 2019 in England.”  Rankin was approached earlier for Ireland in the summer, but he waited until winter for his name to be selected for England tour parties. He was over looked for both the senior squads and the England Lions trip to South Africa and the UAE. He will be officially available for Ireland from January 18.

Cricket Ireland Performance Director Richard Holdsworth was delighted to have Rankin back in the Irish set-up, “its fantastic news for Irish cricket to have a bowler of his undoubted quality back in the fold. We’ve had a number of retirements in recent times, losing quality and proven performers such as Trent Johnston and John Mooney. That has severely depleted our quick bowling stocks so to have Boyd returning gives everyone a tremendous boost. His height and the extra bounce he generates make him such a difficult proposition for opponents, and it gives skipper William Porterfield a fantastic extra option in his armoury.” ALSO READ: Ireland start off ICC Intercontinental Cup 2015-16 with emphatic win over UAE

Rankin’s first tournament in Ireland colours will be the Intercontinental Cup fixture against Papa New Guinea in Townsville, Australia, from January 31 to February 3. Ireland is currently on top of the table with 40 points from their wins against the UAE and Namibia. 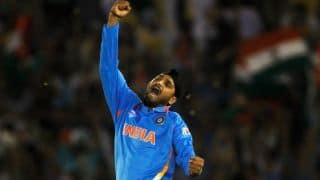