There have been reports of foul play in the group stages according to various local media agencies.

Dhaka: At least four suspected bookmakers have been thrown out of cricket stadiums during the ongoing scandal-tainted Bangladesh Premier League, in efforts to ensure the tournament is graft free, an official said Thursday. BPL secretary Ismail Haider Mallick said anti-corruption officials had spotted the four whom they suspected of placing bets on behalf of clients during Twenty20 league matches, which is illegal in Bangladesh. “We don’t have the law to put them behind bars so we opted to throw them out (of the grounds),” Mallick told AFP, without revealing the nationalities of those identified. ALSO READ: angladesh Premier League (BPL) 2015: Points Table and Team Standings

The BPL, modelled on the glitzy and lucrative Indian Cricket League (IPL), resumed in November after its 2013 edition was blighted by a match-fixing scandal involving players and team owners. An embarrassed Bangladesh Cricket Board (BCB) cancelled last year’s edition but now believes its house is in order. However local media this week labelled a November 30 match “dubious” after several incidents, including a bowler conceding numerous runs in a single over, including with a no-ball and wides, during the Barisal Bulls’ win over the Chittagong Vikings.  “We cannot investigate a match simply based on media reports,” said Mallick. “Our anti-corruption officials are active in every ground and hotel. If they find anything fishy only then we will investigate, concluded Mallick. ALSO READ: Bangladesh Premier League 2015 inaugurated amidst disorder 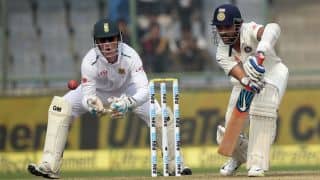