It is Rangpur Riders' maiden BPL title. Dhaka Dynamites have won most number of times (3).

Rangpur Riders thump defending champions Dhaka Dynamites to clinch their maiden BPL (2017) title by 57 runs. They, in turn, got the better Dynamites most titles (3) in tournament history on Tuesday. Dynamites started off well asking Riders to bat. Shakib Al Hasan bowled a wicket-maiden second over; with Riders reeling at 20 for 1 in 5 overs. While Dynamites bowlers restricted Chris Gayle and Brendon McCullum till the last six overs, the tables turned from there on. Riders smashed 94 runs in the death overs to take the score to 206 for 1. In reply, Dynamites struggled and managed only 149 for 9.

Gayle went on to score a magnificent century after getting a reprieve from Shakib on 22. McCullum (51) and Gayle (146) stitched 201 runs for the second wicket to set up a mammoth total. Gayle went past his own record (126) in the qualifiers, and reached the landmark of 11,000 T20 runs.

In match 35, Sher-e-Bangla National stadium was highly criticised for its slow wicket. The game between Rangpur Riders and Comilla Victorians resulted in a low scoring tie, and disappointed the fans. However, it turned out to be a different story in the summit clash.

In pursuit of 207, Dynamites struggled to get going from ball one. They lost their first wicket in the very first over, and were reduced to 1 for 2 in the second. Evin Lewis, Dynamites’ highest run-getter, was looking good but was outdone by Mortaza’s blinder. Kieron Pollard, too, perished soon on a short ball off Rubel Hossain.

Jahurul Islam fought hard with a gritty half-century, but the game was out of Dynamites’ reach till then. Shakib and Islam added 42 runs for the fifth wicket partnership to prevent further embarrassment. Their resistance didn t last for long. Shakib fell to Nazmul Islam to put Dynamites’ final nail in the coffin. Riders’ chipped in with regular breakthroughs to dent Dynamites’ run chase. Shahid Afridi came into bat at No. 8; probably too late to inflict any damage.

Gayle’s heroics ensured a maiden title for Riders. Later, he was adjudged Man of the Match and Man of the Tournament. He finished with fifth edition with 485 runs; including 2 centuries and fifties.

Player of the Tournament: Chris Gayle 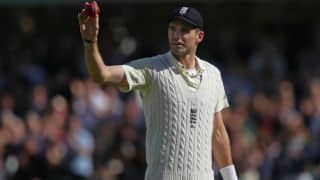