BPL 2017: Sabbir Rahman's side, Sylhet Sixers, are unbeaten in the ongoing edition so far.

Bangladesh Premier League (BPL) 2017 commenced on November 4, and has already witnessed indiscipline from the national players. Firstly, all-rounder Nasir Hossain turned up six minutes late for the toss in his side Sylhet Sixers’ opening clash versus Dhaka Dynamites. The latest to join the list is Hossain’s teammate, Sabbir Rahman who has been penalised for misbehaviour with umpire, Mahfuzur Rahman Litu, after Sixers’ second match on Sunday. Sixers defeated Comilla Victorians by 4 wickets in a modest chase.

Rahman was adjudged lbw for 3 in 146-run chase. After the conclusion of the match, he reportedly moved towards the umpire aggressively and even abused him. “He’s committed a Level 2 offence. Fifty percent of his match fee has been cut, along with (the player being given) three demerits points”, match referee Debroboto Paul told Cricbuzz on Monday. 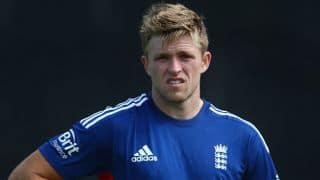