After electing to bat first at the Shere Bangla National Stadium, Mirpur, Dhaka, Comilla Victorians imploded to be bundled out for mere 72 in 16.3 overs against Rangpur Riders in Match 41 of the Bangladesh Premier League on Saturday.

Comilla lost half their side inside the first six overs with Nahidul Islam and Mashrafe Mortaza claiming two wickets each while Shahidul Islam picked one. Tamim Iqbal went for a second-ball duck while fellow opener Anamul Haque could only add five. Skipper Imrul Kayes went for first-bal duck before Shahidul send back Shamsur Rahman for 12.

Mortaza added his second with the big wicket of Thisara Perera for 3.

Ziaur Rahman and Liam Dawson tried to revive Comilla s innings with a stand of 23 runs for the sixth wicket, but Ravi Bopara s three wickets in three overs, for just seven runs helped Rangpur bundle out Comilla for a low total.

Rahman made 21 while Dawson added 8, before both of them fell to Bopara.

In reply, Rangpur lost their opener Mehedi Maruf for five to Sanjit Saha, but Chris Gayle and AB de Villiers took their team home in just 9.3 overs with Gayle scoring an unbeaten 35 off 30 while De Villiers blasted 34 off 22. The duo added 66 runs for the second wicket.

The win, with nine wickets in hand and 63 balls remaining, pushed Rangpur Riders run-rate past Comilla and they top the top spot despite being level on points with 16 with Comilla after 12 games. 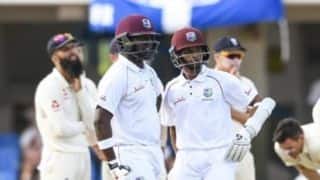