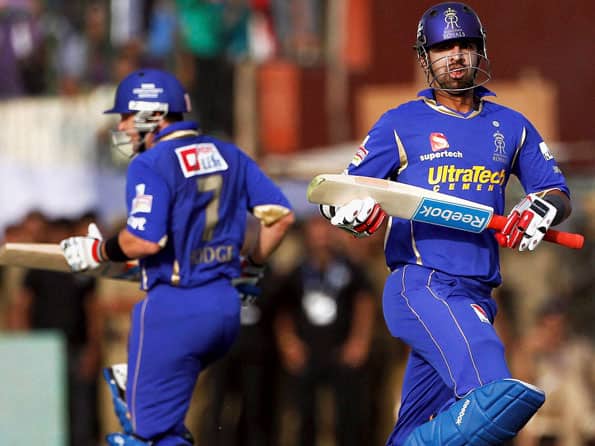 Hodge hit a 29-ball 44 laced with two sixes and three fours while Menaria came up with 30-ball 40 that included one six and four boundaries after KKR skipper Gautam Gambhir elected to field in searing heat.

Owais Shah provided the late burst with a cameo of 11-ball 23, comprising of a six and couple of fours that helped Rajasthan cross the 150-run mark.

For KKR, Brett Lee was the most successful bowler picking up two for 29 runs while Rajat Bhatia cleaned up Shreevats Goswami. There were couple of run-outs too.

Sent in to bat, Royals’ Ajinkya Rahane, who scored 98 in their win over Kings XI Punjab, was run-out by a direct throw from skipper Gambhir stationed at mid-off. Even a dive couldn’t save Rahane who was found atleast a yard short.

Rajasthan skipper Rahul Dravid started in right earnest when he hooked Lee for a six and then hit him for a four.

Off-spinner Sunil Narine making his IPL debut was hit over fine leg for a six.

Dravid hit 24-ball 26 helped by two sixes and an equal numbers of fours before he became another run out victim.

Goswami, who looked good for his 18-ball 23, could not capitalise on the start as he was cleaned up by Bhatia while trying to drive it through the covers.

The loss of two wickets somewhat put brakes on the scoring rate of Rajasthan as both Hodge and Menaria started dealing in singles and doubles to keep scoreboard ticking.

Hodge broke the shackles in the 14th over bowled by Yusuf Pathan when he hit the bowler for two huge sixes and a four to knock 17 runs from that over and took Rajasthan past the 100-run mark.

He then hit Jacques Kallis for two consecutive fours in the next over.

Lee, who was called back for his second spell, put an end to Hodge’s exploits when the Victorian was caught by wicketkeeper Brendon McCullum while trying to play a pre-determined reverse scoop.

New man in Owais Shah made his intentions clear from the outset as he first hit Kallis for three fours and then clobbered Lee for a six and a four to take Rajasthan past 150-run mark.

Menaria was bowled by Lee in the 19th over when he tried to go high over the cover region but missed the hit. (PTI)