There was much talk about the team preferring to chase at the venue, which has been a happy hunting ground for teams batting second. However, Bailey chose to bat after winning the toss much to the delight of MS Dhoni who later said that he would have chosen to bowl.

Similar to the first ODI, Aaron Finch and Phil Hughes started off watchfully. Bhuvneshwar Kumar, who opened the bowling got a hint of swing and the batsmen gave him the due respect. Even Ishant Sharma was accurate enough not to allow the batsmen to free their arms.

Soon after the initial overs, Hughes remained cautious while Finch went after the bowlers as the Aussie scoreboard gathered some much needed momentum. India, though, had their an opportunity when Finch offered a sharp chance to Yuvraj Singh at backward point.

The Indian pacers tried to bowl short of good length but didn’t have the pace to rattle the batsmen.

Finch did most of the scoring and completed his half-century with a pull over mid-wicket for a six. However, the window of opportunity opened when the Australian opener followed the six with a tight single by tapping the ball to mid-off. However, an agile Suresh Raina didn’t miss the opportunity and hit the stumps accurately.

Dhoni’s problems weren’t limited to Australia’s fluent batting. His lead spinner Ravichandran Ashwin looked completely out of sorts. Shane Watson, who walked in to bat at No 3 wasn’t expected to a struggle on a wicket where he has played enough matches as part of Rajasthan Royals. While Hughes accumulated runs taking singles, Watson played role of the aggressor to perfection going after the bowlers.

The burly all-rounder looked in complete control of his innings and appeared set for a big score. Hughes and Watson completed their half-centuries in consecutive overs. Hughes reached his fifty in 63 balls while Watson did it in 46 balls. During his innings Watson even played one of his trademark shots — hopping down and smashing Ashwin for a six over deep midwicket.

The duo soon completed a 100-run partnership. India finally managed to pluck the second wicket after an over-ambitious Watson hammered Vinay Kumar but the ball ballooned in the air and Ishant at the long-on boundary took a well-judged catch. Watson scored 59 in 53 balls hitting six boundaries and three sixes.

Despite Watson’s departure, Hughes and skipper George Bailey didn’t let the run-rate dip. Dhoni’s go-to man — part-time spinner Yuvraj Singh went for runs. The left-hander Hughes looked set for his third ODI hundred. But Ashwin managed to find a faint edge off the batsman. Hughes was first beaten for bounce and a similar follow-up delivery saw him go for a cut shot and the faint edge was well-taken by Dhoni. He was dismissed for 83.

By the end of second powerplay — 40 overs — the Aussies were going at almost six an over reaching 237 for three. With Glenn Maxwell at the crease, there was enough scope for acceleration. From thereon, it was Maxwell and Bailey show as they carted the bowlers all around. It wasn’t a powerpacked show from the duo but they managed to find the gaps perfectly and occasionally went over the infield. The runs started flowing from their blades and a score in excess of 300 score looked imminent.

While Bhuvneshwar had a better day with the ball than his fellow bowlers, his catching in the outfield was erratic. First he misjudged a catch from Hughes at mid-wicket early in the innings and then towards the end, dropped an aggressive Maxwell.

Bailey reached his fifty in 32 balls while Maxwell bettered his skipper by achieving the same in 30 balls. The latter finally gifted his wicket away with a needless second run as both batsmen found themselves on the same end and Maxwell walked back scoring 53 from 32 balls.

The partnership of 96 in 51 balls boosted Australia’s position. Bailey along with Adam Voges then continued to score quick runs to take Australia to their eventual score. Bailey ended up with 92 hitting eight boundaries and five sixes.

It’s a giant task for India but surely not impossible with their batting prowess. 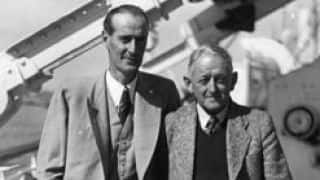 Ashes 1905: Fergie appointed a scorer and baggage master after visiting the dentist