Eoin Morgan set to retire from international cricket after battling with injuries and poor form in recent times. Jos Buttler likely to take over as the captain of England.

Eoin Morgan Ponders International Retirement: England captain Eoin Morgan is contemplating retirement from international cricket after his poor run with the bat in recent times along with fitness issues, according to a report published in The Guardian. Morgan, who changed the way England played limited-overs cricket has been out of sorts for quite some time now and his most recent outing against The Netherlands Amstelveen made matters worse where the left-hander registered two ducks in the ODI series against the Dutch.

With Morgan mulling over retiring from both forms of the game (ODI & T20I), Jos Buttler is likely to take over as the captain of England. Buttler has been the vice-captain of England since 2015 and has already led England on 13 occasions. Another left-hand batter Moeen Ali is also in the fray for the top job, according to sources in the English media. However, Buttler with prior experience in leading the side might be the favourite to take over.

“If I don’t think I am good enough or I don’t feel I am contributing to the team, then I will finish,” Morgan had said earlier after the series against the Netherlands and conceded the fact that recovering physically after matches is becoming a challenge for him and he is not younger day by day.

Morgan has played 248 ODIs and 115 T20Is for England, having scored 7701 runs in 50-over format and 2458 in the shortest format of the game. With 14 ODI hundreds to his name, Morgan will go down as one of the best players for England in the limited overs format and the one who revolutionised the shorter formats of the game for England along with former head coach Trevor Bayliss. 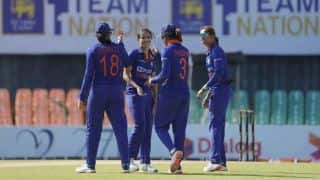