South Africa T20 skipper Faf du Plessis has praised Brendon McCullum for his commitment to the spirit of the game.

South African team ahead of the Twenty20 International (T20I) series with Australia has complimented the recently retired Brendon McCullum as a source of inspiration to play cricket in the right way and spirit. South Africa and Australia are to clash in a three-match T20I series starting on Friday. Australia last toured South Africa in 2014 where they lost out to the visitor with Mitchell Johnson and Ryan Harris being the game changers. South Africa current T20 skipper, Faf du Plessis had called upon McCullum as an role model in understanding the spirit of cricket. “You can call him a pioneer,” du Plessis said.

“He plays the game in the right way … other nations see you can play the game of cricket in that spirit and you don’t have to be super aggressive or calling someone names,” du Plessis was quoted by cricket.com.au. It was in 2014 when du Plessis had called the Australian team as pack of dogs, after he was hounded for picking up the ball while batting in the middle.

“They’ve always been aggressive. I haven’t played a game against them when that hasn’t been the case,” du Plessis has said back then. Du Plessis speaking on his teams attitude and style said that the try not to super nice but stay just right in the sport. Du Plessis added, “You can enjoy cricket just as much and the games will still be as competitive. That’s the way we like to play our cricket. It’s not like we try to be super, super nice guys but we want to play the game in the right way.” 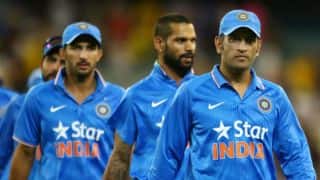