Dwayne Smith and Brendon McCullum added 93 runs for the opening partnership for Gujarat Lions in pursuit of Rising Pune Supergiants target of 196 which helped their team pull-off a three wicket win.

Gujarat Lions came in all guns blazing with openers Brendon McCullum and Dwayne Smith looking in ominous form chasing Rising Pune Supergiants target of 196. Despite the final over drama GL came on top clinching the match by a margin of three wickets achieving the target of 196 runs with the loss of 7 wickets. Both McCullum and Smith took the RPS bowling apart after getting just 9 runs in two over, openers launched into the GL attack picking away 24 runs in the third over where McCullum went haywire on Albie Morkel. Since then it was all the McCullum-Smith show. By the end of the power-play GL has already amassed 72 runs in just 6 overs.Both players notched up 63 runs in just four overs.McCullum was finally out on 43 off 22 balls with Rajat Bhatia getting his first wicket of the match. Smith was not to be stopped he crashed the boundary off the next ball, to bring up his fifty in just 28 balls. Live Cricket Scorecard: Rising Pune Supergiants vs Gujarat Lions, IPL 2016, Match 25

Smith added just 13 run to his score to finally be dismissed for 63 by Thisera Perera. Perera bowled a perfect yorker to send Smith middle crashing down. Skipper Suresh Raina and Dinesh Karthik carried on the good work for GL as they constructed a 51 run partnership for the 3rd wicket. Karthik played a healthy cameo of 33 runs from 20 balls to keep the run-rate going for GL. Raina who did not look at his fluent best managed to survive and remained not-out on.  The fourth wicket to fall for Dwayne Bravo, who got out after making 7 runs from 6 balls. Come in Ravindra Jadeja who faced just one ball only to be run-out by Dhoni in a comical fashion. (Ashok Dinda performs the Cristiano Ronaldo celebration). After the completion of 19th over GL required 9 runs off 6 balls with Raina and James Faulkner in the middle.

Perera comes into bowl the final over and gives a nice juicy full toss to Faulkner, who pounces on for a boundary on the on side. WIDE to follow, Perera did not look one bit the experienced bowler Dhoni would have hoped for. OUT!! Perera manages to get a edge of Raina with the ball clipping the leg stump. Raina valiant innings of 34 comes to an end. Ishan Kishan comes into bat, with Faulkner on strike. OUT! Ishan departs playing just one ball as Saurabh Tiwary directs hit the stumps from mid-off.  TWO RUNS Faulkner comes down the track and manages to get the ball past long-on for two runs. 1 needed off 1. Perera digs the ball short as Faulkner pulls it just beside from the fielder standing on mid-on.

Earlier in the day, Raina winning the toss opted to bowl first, allowing RPS to bat first on a batsmen friendly pitch. It was Australian skipper Steven Smith who crashed in the party for GL hitting his first ever T20 and IPL century in just 53 balls. Smith’s knock 101 contained as many as 8 boundaries and 5 massive sixes. Smith was ably supported Rahane, who brought up his fourth IPL  this season in 43 balls. Captain MS Dhoni chipped in with 30 quick runs in just 18 balls. 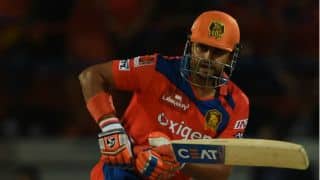 Video: When Dwayne Bravo and MS Dhoni collided with each other