Brendon McCullum, who has asthma since childhood, was reported to have exceeded the allowable limit for salbutamol, keeping in view the bad air quality of Delhi.

Former New Zealand skipper Brendon McCullum has opened up about his positive drug test during his small stint with IPL franchise Gujarat Lions in 2016, saying that it was nothing like a “failed drug test.” The urine sample of players was taken after the match between Gujarat Lions and Delhi Daredevils at New Delhi’s Feroz Shah Kotla Ground, where McCullum scored 60 runs off 36 balls as Lions won the match by 1 run in a thriller.

“I certainly don’t see it as a failed drug test. It was just a case of we just need to seek clarification and apply for this. I have no ill-feeling about [the process] and I also have no guilt or remorse about it because I needed a puff of my inhaler at that time,” McCullum added.

McCullum, who has asthma since childhood, was reported to have exceeded the allowable limit for salbutamol, a drug that is used to treat asthma. Keeping in view the bad air quality of Delhi at that time, he took more than the usual dose of his medicine, thus justifying the urine sample result.

After more than six months of struggle with the medical panel, McCullum secured a retroactive therapeutic use exemption (TUE) which was issued by a panel of independent medical experts in Sweden.

“There was a bit of a process to go through to make sure they had all the information and ticked off the areas they wanted to see, but we went through it all and [BCCI] was actually pretty good to work with, in the end,” stuff.co.nz quoted McCullum.

TUE is a certificate stating that a substance is being administered to an athlete to treat a medical condition and not as a performance-enhancing drug.

McCullum, who bid adieu to the international cricket in 2016, recently played for Royal Challengers Bangalore (RCB) in the 2018 edition of the IPL. 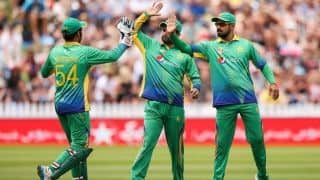