Brendon McCullum has become the second wicket to fall for Chennai Super Kings (CSK) against Royal Challengers Bangalore (RCB) in Match 37 of the Indian Premier League (IPL) 2015. His opening partner Dwayne Smith fell for a duck in the very first over. LIVE UPDATES: CSK vs RCB Match 37 IPL 2015

McCullum played a few crafty shots in his knock of 20 from 15 balls, but his timing was not his best. He eventually mistimed a pull shot to the deep midwicket fielder becoming David Wiese’s first victim. The wicket will put CSK under considerable pressure since they’re scoring at only around 6 runs per over at present and have lost their explosive opening batsmen early. LIVE Scorecard: CSK vs RCB Match 37, IPL 2015

Earlier CSK won the toss and elected to bat first. Ravichandran Ashwin continues to be sidelined so as to give time for recovery to the little finger on his left hand. They are playing Ishwar Pandey today. RCB decided to ‘rest’ Chris Gayle and are playing Nic Maddinson instead, Iqbal Abdullah makes a comeback. 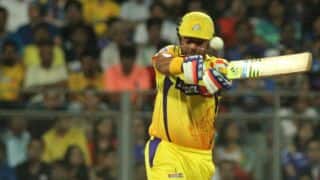