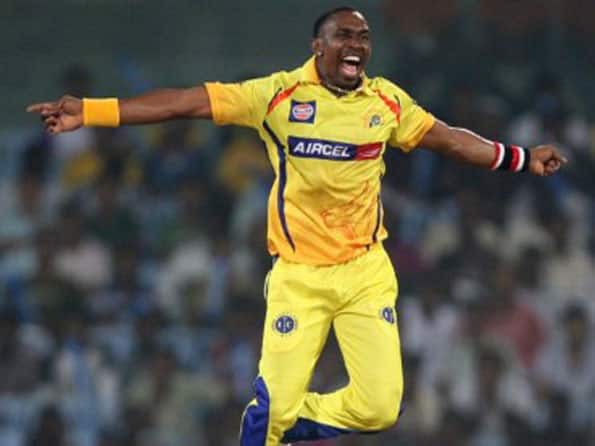 Chasing a modest 146, Chennai were struggling at 77 for five inside the 12th over before Bravo came up with a flurry of boundaries and sixes to help the hosts record their first win in two matches and remain afloat in the tournament.

With 23 needed of last 12 balls, Bravo hammered Dale Steyn for 17 runs in the penultimate over to turn the tables on Cobras.

The West Indian along with Albie Morkel (6 not out) then knocked off the required five runs for victory with two balls to spare.

It was Bravo, who proved to be the Cobras’ nemesis, as he struck three fours and two sixes to swing the match in Chennai’s favour at the MA Chidambaram Stadium.

Bravo’s heroics meant J P Duminy’s all-round show went in vain as the hard-hitting West Indian along with skipper Mahendra Singh Dhoni (15) added 43 runs for the sixth wicket to lay the foundation for the final assault.

Duminy, following his 24-ball 29 and his 57-run fourth-wicket partnership with Owais Shah (45 off 38), returned impressive figure of 4 for 20 as Chennai found themselves reeling at one stage after the fall of Suresh Raina (20).

But fortunes swung as Bravo provided the much-needed impetus by hitting Vernon Philander over extra cover for a massive six in the 18th over.

The over saw them score 10 runs, but at the expense of Dhoni’s wicket.

Bravo was, however, unfazed as he saw his team home for a crucial victory.

By the 12th over, half the CSK side was back in the pavillion as Duminy accounted for Wriddhiman Saha (6) and Suresh Raina (20) in one over to take his tally to four.

But Bravo’s pyrotechnics took the Super Kings past the target of 145 in the last over.

Earlier, electing to bat, Owais Shah and Duminy chipped in with useful contributions to help Cape Cobras post a modest total. Cobras, who at one stage looked set to score over 170, were done in by pacer Morkel, who put the breaks on the visitors’ scoring rate by claiming two important wickets.

At the end of 16th over, Cobras were comfortably placed at 124 for three, thanks to some brisk batting by Shah and Duminy, but once the former (45 off 38 balls) fell to Morkel, Cobras lost the plot, losing wickets at regular intervals.

Off-spinner Ravichandran Ashwin got rid of Richard Levi (6) off his first delivery when he had the opener trapped to provide Chennai their first breakthrough.

The Cobras slumped to 40 for two in the fifth over as Herschelle Gibbs (18) too departed, miscuing a Doug Bollinger delivery, but not before playing some exquisite strokes.

After the departure of both the openers, Dane Vilas (18) and Shah kept the scoreboard moving with occasional fours as the South African T20 champions crossed the 50-run mark in the seventh over.

As the batsmen were settling down, Dwayne Bravo bowled Vilas with a slower one that straightened after pitching.

Vilas struck a four and a six in his 19-ball knock.

But the loss did not stop Shah from taking risk as he first plundered two consecutive fours off Bollinger in the 11th over and then hit slow left-arm orthodox Shadab Jakati for a huge six over long-on to keep the scoreboard tickling.

Duminy got a reprieve in the 16th over when Jakati dropped him off his own bowling, when he was on 29.

However, Duminy failed to capitalise on the dropped chance as he was caught by Jakati at short fine-leg in the next over off Albie Morkel.

Cobras were dealt a big blow when the in-form Shah too departed in the same over, caught at midwicket by Michael Hussey off Morkel.

Once Duminy and Shah departed, Cobras struggled to get off the blocks against a disciplined bowling effort, led by Morkel as they scored just 16 runs off the last four overs.

For Chennai, Morkel, Dwayne Bravo and Doug Bollinger accounted for two wickets each, while Ashwin chipped in with one.(PTI)