British Prime Minister Theresa May is set to become a member of the most prestigious cricket club in the world - Marylebone Cricket Club (MCC), according to a media report.

London: British Prime Minister Theresa May is set to become a member of the most prestigious cricket club in the world – Marylebone Cricket Club (MCC), according to a media report. According to the Sunday Times, May is set to emulate her sporting hero Geoffrey Boycott by becoming a member of the elite cricket club. Senior figures at the MCC the Marylebone Cricket Club are quietly plotting to get May fast-tracked to membership in the new year, the report said. Normally a prospective member needs to be supported by four existing members to be considered. Even then they face a wait that is now 27 years to get in.

Private discussions have already taken place among senior members about finding backers for an application by the Prime Minister, the report said. Committee members at Lord’s have also agreed to catapult her to the top of the waiting list when they next meet on February 8. May’s predecessor John Major was given accelerated membership after only two years on the list when he was Prime Minister. David Cameron also became an MCC member in 2011 while he was in Downing Street. But he was elected after waiting for 24 years, having joined the list in 1987.

“The Prime Minister is not a candidate for membership of the MCC at present and the MCC committee has therefore not discussed electing the prime minister out of turn,” an MCC spokesman was quoted as saying. “As and when she becomes a candidate, that’s something that the committee would, of course, discuss,” he said.

MCC Cricket Committee proposes Sending off to be a law

“There is a group of people who would like to give the prime minister a Christmas present and names are being canvassed to propose her. The understanding is that the committee will be happy to elect her out of turn,” a source was quoted as saying.

The Prime Minister is a keen cricket fan and sought to facilitate relations on a trip to India last month by presenting her counterpart Narendra Modi with a silver cricket bat. She has spoken in the past of how as a girl she had a poster of Boycott on her bedroom wall. “I have been a Geoff Boycott fan all my life,” she said. He “solidly got on with what he was doing”. Australia close in on victory at Brisbane despite resolute Pakistani fightback 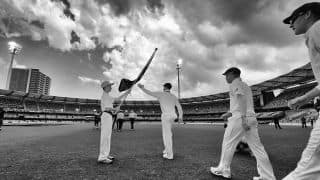