Britney Cooper’s 48-ball 61 helped West Indies post 143 in 20 overs against New Zealand in teh second semi-final of Women’s World T20 2016 at Wankhede Stadium, Mumbai on Thursday. The likes of Deandra Dottin and Merissa Aguilleira chipped in with quick few runs towards the end when the White Ferns had sent Britney back to the dugout. The West Indies Women bagged 38 runs in the final four overs and this poor death bowling of the White Ferns could cost them the semi-final today. Sophie Devine was easily the pick of the bowlers for New Zealand who claimed four wickets and the other wicket was taken by Morna Nielsen. LIVE CRICKET SCORECARD: New Zealand vs West Indies, Semi-Final 2, ICC Women’s World T20 Cup 2016 at Mumbai

Morna opened the bowling attack for New Zealand with Lea Tahuhu was at the other end with the ball for the White Ferns. Morna bowled the fist over of the day giving just five runs before the West Indian openers, Hayley Matthews and Stafanie Taylor take off Lea immediately as she was brought into the attack in the second over. Hayley opened the boundary account for West Indies with an excellent four towards the covers before a thick outside edge beat the slip fielder for a second boundary of that over.

Morna made the first breakthrough for New Zealand when she dismissed Hayley in the third over. Just when the West Indian opener looked to get going, Morna trapped her in front of the pads and that dismissal left West Indies Women at 18 for 1. The West Indian skipper Stafanie once again was in a situation where she had to bring up a big knock. She went after Lea in the very next over, bagging 10 runs which was inclusive of two boundaries. She had Britney Cooper on the other end who was also scoring freely.

The White Ferns handed the ball next to Leigh Kasperek who could not keep the West Indian duo quiet. She pushed the ball towards the covers for a four before she came forward in style to smash it towards the mid-off for the over’s second boundary. The next two overs went slow, the West Indies could not manage any big shot before Britney added a third boundary to her account. New Zealand’s Sophie Devine finally made a breakthrough for her side when she dismissed Stafanie in the 12th over. It was huge wicket as she trapped the West Indian skipper, who threw away her wicket while attempting a slog and was caught by Katie Perkins at the mid-wicket. 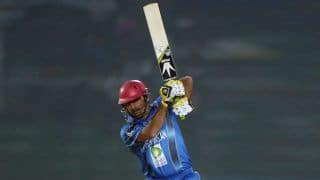