Dalmiya further said the CAB would write separately to request for reimbursement of the losses incurred due to the abandonment of the South Africa ODI match.

The Cricket Association of Bengal will write to the BCCI to award it a match during England’s tour next year as a compensation for the cancelled South Africa ODI, its president Avishek Dalmiya said on Sunday. The second and third ODIs against South Africa in Lucknow and Kolkata on March 15 and 18 respectively were cancelled as the COVID-19 pandemic brought to halt all the sporting events across the world.

“We will request BCCI to plan the series (against England) in such a way that the two associations get compensated for the two abandoned matches,” Dalmiya was quoted by PTI.

“We would be looking forward to the BCCI to negotiate with the England Cricket Board because they are the ones to tour India in early 2021, that’s the next home series.”

The next home series is from January to March 2021 when England is scheduled to come for a full tour.

England’s limited-overs tour of India comprising three ODIs and as many T20Is was originally scheduled from September-October this year but has now been cancelled due to the COVID-19 pandemic.

Dalmiya further said the CAB would write separately to request for reimbursement of the losses incurred due to the abandonment of the South Africa ODI match.

“We will send a request sympathetically to reimburse the expenses incurred for the printing of match tickets, sale of tickets, getting the venue ready. The calculations are being worked out,” he said.

He also backed BCCI president Sourav Ganguly as the next chairman of International Cricket Council.

“It’s important that someone from India becomes the chairman. The global cricket is going through a difficult phase due to the pandemic. A strong ICC is the need of the hour in order to protect the game.”

“I think that a strong leadership is the need of the hour. Along with the telecast right holders, the sponsors are one of the important stakeholders. So it’s very important that India plays a crucial role as far as the ICC is concerned.

“Then there are tax issues, which needs to be resolved between the ICC and the BCCI. I don’t know how or what the thoughts of the BCCI is. I’m sure that they would also be considering every aspect of it,” he added. 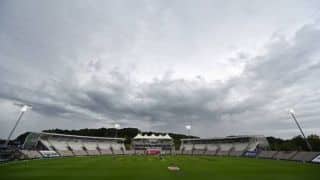