Australia dropped injured duo Nathan Hauritz and Mike Hussey from its World Cup squad, calling up Callum Ferguson and Jason Krejza to replace them at this month's showpiece one-day tournament. 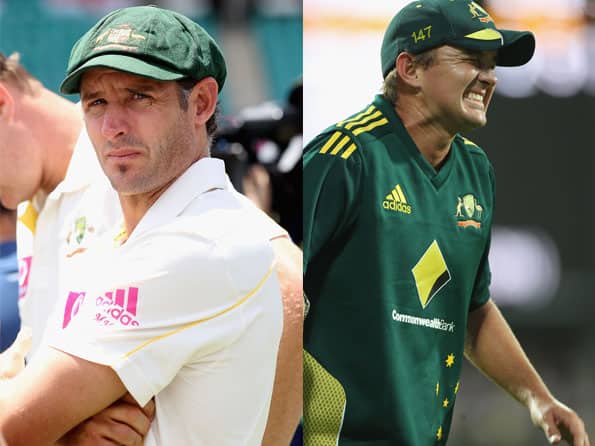 Australia dropped injured duo Nathan Hauritz and Mike Hussey from its World Cup squad, calling up Callum Ferguson and Jason Krejza to replace them at this month’s showpiece one-day tournament.

Hussey and Hauritz were both in doubt after undergoing surgery on injuries and chief selector Andrew Hilditch said officials had decided to replace them and take a fully-fit squad to the World Cup which is starts on February 19.

“Based on the medical advice an application is being made to the ICC to replace both players in the World Cup squad,” Hilditch said in a statement.

“(Selectors have) determined that the best strategy to ensure a successful campaign is for Australia to enter the tournament with a fully fit squad of fifteen from the first game.”

Veteran batsman Hussey, felled with a hamstring tendon injury, has been replaced by the 26-year-old Ferguson, who was recently called up for the final two matches of Australia’s one-day series against England.

“Callum has an excellent record in one-day international cricket and played well in the one-day game against England in Sydney recently,” said Hilditch.

“We think he ll play well in sub-continental conditions.”

The right-hander, who averages 44.00 from 28 ODIs, has bounced back from a devastating knee injury sustained in the 2009 ICC Champions Trophy final against New Zealand.

He was chosen for the World Cup after Shaun Marsh, the selectors’ preference to replace Hussey, was also hit with a hamstring strain.

Despite only making his ODI debut last Sunday, Jason Krejza, 28, will step in for Hauritz, who dislocated his shoulder in the first ODI clash with England.

Krejza took 12 wickets on his 2008 Test debut and picked up 2 for 53 at the weekend after being called up for Xavier Doherty, who was first in line to replace Hauritz until he suffered a back injury.

“Jason toured India with the Australian Test team in 2008 and understands those conditions. We re certain he ll be a key member of our squad,” said Hilditch of the aggressive off-spinner.”

“He is batting regularly and is expected to transition into unrestricted training soon after the team arrives in India,” said Kountouris.

Steve Smith was making “very good progress” from a groin injury incurred during the sixth ODI against England, while Brad Haddin was expected to recover soon from a blow to the knee, he added.