Can the menace of black money be ended?

Probing betting, match and spot-fixing in cricket is turning out to be a mirage like bringing back black money stashed abroad. The Supreme Court has asked the Justice Mukul Mudgal Committee to probe all the nefarious activities in the last edition of the Indian Premier League (IPL), just as it also gave the government a week’s time Friday to form a Special Investigation Team (SIT) to end the menace of black money.

Will the two parallel investigations end the twin problems of betting and match and spot-fixing in cricket and the black money parked overseas? The remit of this column is not to go deep into the black money SIT, it is to see how far the Mudgal committee succeeds in at least exposing the black deeds of cricketers, cricket administrators and the betting syndicates backed by the powerful mafia.

Obviously, the cricket probe is going to be highly sensitive as the committee is to look into the role of cricketers and administrators in the entire network. The freedom to go to the bottom of the issue notwithstanding and the investigative powers it has been given, the Mudgal Committee will have to tread carefully as the people it is going to investigate are no small fry. The list includes a couple of top cricketers and the president of the Indian cricket board.

The committee should not throw its hands up like the Central Bureau of Investigation (CBI) did at the time of probing match-fixing. It has to show the same determination to deal with people as the apex court dealt with the repeated appeals of the board and its sidelined president Narayanaswamy Srinivasan. The court refused to modify its order of keeping him off the board’s activities.

One can understand Srinivasan’s anxiety. He has to be back in the thick of things before the Annual General Meeting of the Board in September so as to stay as board chief. Before that he would like to be back in action in the board so that he could go and take over as the first chairman of the International Cricket Council (ICC) in July. He has been kept out of the board ever since his son-in-law, a cricket “sympathiser,” was found allegedly betting and spot-fixing in last year’s IPL.

To Srinivasan’s misfortune, while the court was coming down on him, the Supreme Court-appointed IPL chief Sunil Gavaskar was confessing that the bookies had approached two players in this year’s edition of the Twenty20 competition. As if on cue, around the same time media reports in London revealed that New Zealander Brendon McCullum has told ICC’s anti-corruption unit that a former cricketer had approached him to under-perform in the 2008 IPL and again on New Zealand’s tour of England that year. Speculation is the spice of such revelations and a former cricketer’s name was promptly thrown up and he was quick to dismiss it as kite-flying.

Seeing the kind of money the players are making from the Twenty20 tournaments the world over, particularly in the IPL, the offer of a sum of $180,000 to someone like McCullum, who is turning out to be a successful captain of New Zealand, appears chicken feed! For good measure, the ICC has served an injunction against the paper from coming out with further details of its investigating agency.

How do these sudden investigations and sting operations actually work and how much truth is there in such revelations? Could some of it, in fact most of it, be just titillating expressions by bookies who lost heavily in the illegal operations or some gullible reporter buying a concocted story?

Some media agencies and their reporters have made a living out of such stories.

Of course, there is that case of the then Pakistan captain Salman Butt and his two errant teammates Mohammad Asif and Mohammed Aamer being found guilty of spot-fixing in the 2010 Lord’s Test after accepting money from a bookie. For this the credit must go to the media, the England and Wales Cricket Board (ECB) and Scotland Yard. The London police filed criminal cases against the players and got them convicted and sent them to jail. Jail can prove to be a real deterrent for players from going anywhere near fixing.

How does it work on the ground? For instance in Saturday’s IPL game, when the enfant terrible of English cricket Kevin Pietersen went for an ungainly switch-hit, making a mess of the stumps as well as Daredevils chase of an attainable Mumbai Indians target and lose by 15 runs, the purists might have sneered at him while the punters in the stands might have viewed it with suspicion.

The immediate reaction from some in such circumstances is the guy must have pocketed a pile! Fortunately for Pietersen, he can perhaps be accused of anything but doing something in the field with an ulterior motive. Whatever the ECB think about his misdemeanor, his team-mates swear by him as an outstanding cricketer.

It is heartening to find Australia captain Michael Clarke saying that as an Australian cricketer he is proud of what his team has done and achieved and that they are educated very well in what is right and what is wrong.

Can the India captain say like his Australian counterpart that the players he is leading are all clean and that he is proud of them? That would be some statement! IPL 2014: Keiron Pollard believes a crunch match is on against Rajasthan Royals 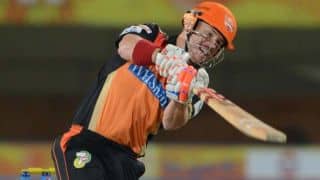