Can You Guess The Cricketer & Reason Behind Him Sitting Like This? Answer Inside

Can You Guess The Cricketer & Reason Behind Him Sitting Like This? Answer Inside

Can you guess the cricketer in the photo?

A picture says a thousand words and while the first look of it might suggest that the cricketer in the frame might have had a torrid time in the middle but in reality, it is more of relief than dejection. Former England captain Nasser Hussain (in the picture), after taking his team home against Pakistan in Karachi in the year 2000 came back to the dressing room and got a bit too emotional as England stalled Pakistan’s 34-match unbeaten record at the Karachi National Stadium under extreme conditions with street lamps on where visibility was bare minimum.

Opting to bat first, Pakistan scored 405 in the first innings, thanks to twin centuries that came from the bat of Inzamam-ul-Haq (142) and Mohammad Yousuf (117) after losing the top order for not too many on the board. England in reply were bowled out for 388, giving Pakistan a paltry lead of 17 runs. Michael Atherton (125) scored a century with captain Nasser Hussain (51) gave him good support.

To date, this picture is the most viewed on the feed … Nasser Hussain may look dejected but he is just emotional after steering England to a dramatic series victory in the Stygian gloom at Karachi in 2000. It was Pakistan’s first loss at the ground pic.twitter.com/BNW3stgmQJ

Pakistan were bowled out for 158 in the second innings, leaving England 176 to chase and win the third Test and final Test of the series with the first two yielding no results. Graham Thorpe (64) was the star with the bat for England in the second innings as the visitors reached the target in trying conditions. Hussain too remained unbeaten on 6 and saw England through that helped them win the three-match Test series.

The then Pakistan captain Moin Khan appealed several times against poor light to the on-field umpires in his desperate attempt to stop the game but the umpires had none of it and eventually received an official warning by West Indian umpire Steve Bucknor. The match finished at 5.55pm local time in an empty stadium with many spectators leaving early for Iftar (time for breaking fast). 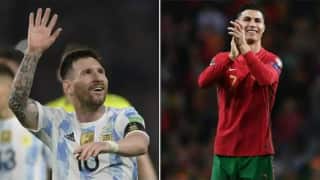 Cristiano Ronaldo Vs Lionel Messi: A Statistical Review of FIFA World Cup - Can You Guess Who Is Better?