Opening batsman Nitish Kumar made history becoming the youngest player at World Cup tournament, playing for Canada in their Group A clash against Zimbabwe on Monday. 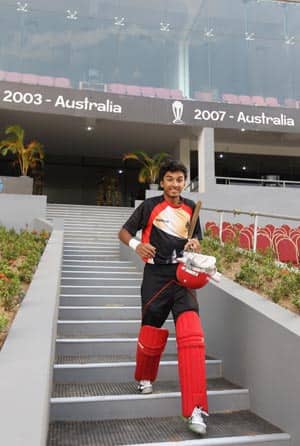 Nitish Kumar during a practise session.

Nitish Kumar became the youngest player to make his World Cup debut when he turned out for Canada in their World Cup Group A match against Zimbabwe at Nagpur on Monday.

The 16-year-old schoolboy, who plays for Toronto Cricket Skating and Curling Club, however, had an inauspicious World Cup debut when he fell cheaply to spinner Ray Price for 1.

Call it a coincidence or not, Nitish opened the innings with the oldest player of the World Cup, 40-year-old John Davison.

He was given a month off from his school to play in the marquee event. The Canadian opener made his one-day international debut against Afghanistan in Sharjah in February last year.