Cape Cobras vs Hobart Hurricanes CLT20 2014 Match 6 at Hyderbad: Robin Peterson on the attack for Cobras

Cape Cobras vs Hobart Hurricanes CLT20 2014 Match 6 at Hyderbad: Robin Peterson on the attack for Cobras

Cape Cobras have reached 154 for six and are looking good for a big score after 17 overs.

Sybrand Englebrecht, the young hopeful of South Africa who was looking good at the crease for a smart cameo towards the end of the innings, fell to Ben Laughlin to spark off wild celebrations from the Australian pacer. Vernon Philander then came on cut two elegant boundaries off Xavier Doherty and the run flow continued in the next over with Robin Peterson taking Laughlin to the cleaners.

Justin Ontong was out after making 10 from eight balls for the Cape Cobras against Hobart Hurricanes in the 6th match of the Champions League T20 (CLT20). He was bowled by Joe Mennie. Sybrand Engelbrecht was the new man in.

Earlier, Richard Levi was dismissed for 42 after he started slowly, making just three off his first 10 balls. He then switched gears quickly to start scoring at a good rate. He was dismissed by a Ben Laughlin slower ball, caught by Joe Mennie. Doug Bollinger took his first wicket. Omphile Ramela smacked Bollinger for two sixes and a four before being cleaned up trying to go for another shot after Ben Hilfenhaus had got rid of Hashim Amla. 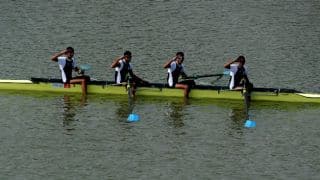 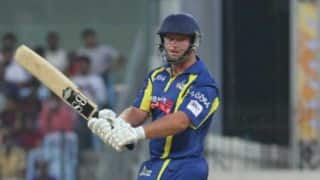