Cape Town Blitz's ambidextrous spinner Gregory Mahlokwana has taken social media by storm after he picked up a wicket with each hand during a Mzansi Super League clash on Sunday against Durban Heat. He first picked the wicket of Sarel Erwee, bowling with his right hand. Erwee was looking to give himself room and open up the off-side, but unfortunately found cover in the way and was caught. Then, with his left hand, he dismissed Vilas, who tried to give him the charge, but missed the armer completely and was bowled. These two wickets from the ambidextrous spinner have stunned fans.

Here are the two wickets:

Will the ambidextrous Mahlokwana be able to take a left handed and a right handed wicket today?#MSLT20 pic.twitter.com/rkw29YIb3g

That’s Mahlokwana’s second of the day. His first wicket was bowled Right handed and now he gets a wicket with the quicker left arm.#MSLT20 pic.twitter.com/Gey4JPypq1

Mahlokawa made his debut for Titans in the 2018-19 season and played in the CSA T20 Challenge and One-Day Cup. 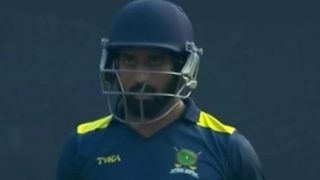