Shreyas Iyer admitted that bowling during the death is a major concern for the Capitals after they were outplayed by Mumbai Indians.

A disappointed Delhi Capitals skipper Shreyas Iyer admitted that bowling during the death overs remained a major concern for his team after it was outplayed by Mumbai Indians in a return leg IPL clash on Thursday.

The hosts, on a roll with a hat-trick of victories, suffered a 40-run defeat against MI after being restricted to 128 for nine while chasing 169. It was Delhi’s third loss out of the four matches that the hosts played at the Feroz Shah Kotla stadium this season.

“It is important for us to win the home games. Especially on these wickets. We lost the toss as well and they outplayed us in all three departments. Credit to them,” Iyer said, referring to the 51 runs which Mumbai scored in the last three overs. “A lot of concern as far as the death overs were concerned. It wasn’t easy to bat in the second innings. The ball was stopping. It was difficult for the new batters. The last three overs were game changing.”

Asked if Delhi have been training on similar wickets, Iyer said: “We practice at the nets and those wickets are also slow. When you come here, it is totally different.”

MI skipper Rohit Sharma credited the good start he and Quinton de Kock provided the side and praised the bowlers spinners in particular – for defending the total of 168 for 5.

“After the first two overs that we played, we thought 140 was the good score. Quinny (de Kock) and I had that talk and then luckily towards the end we had wickets in hand and could use our power-hitters to play just the way they’ve been playing,” he said. “We then knew we had the spinners, who did the job perfectly. The toss was something where I had made up my mind. Even in the last ODI against Australia we found it tough to chase. I knew that if we got 140-150, we had the bowlers to keep us in the game.”

Legspinner Rahul Chahar was the top bowler for Mumbai as he returned with three wickets to derail Delhi’s chase early on. Talking about Chahar, Rohit said: “Rahul Chahar was there with us last year, we wanted to get him in even last year where Mayank was playing. He has a good attitude and is clear with what he wants to do. They had left handers and Rahul was confident to bowl to left handers, which is what he told me before the innings.”

Asked about his decision behind selecting the playing XI, the MI skipper said: “Jayant (Yadav) was an obvious swap with the number of lefties they had. With Cutting, we wanted him to exploit the new ball and I thought it was a good move to send him up. The top three remains the same and numbers four, five and six depends on the situation and the venue, which is something we’ve conveyed to the boys as well.”

Hardik Pandya, who was adjudged the match of the match for his 15-ball 32, said he has been hitting the ball well.

“Even I was telling myself that I don’t think I’ve ever hit the ball better. I have been working hard in the nets and it has been coming off well for me. I like to keep the basics straight, even in the death if you keep your shape and hope for bowlers to miss, you can hit hard,” Pandya said.

“I am using my brain well, reading the wicket well in this season. I have five more games to go and then the play-offs, and I hope to keep going like this through the season.”

de Kock, who had hit a 27-ball 35, explained that playing big shots was very difficult on the slow Kotla wicket. “It was quite slow and sticky, we knew if we had wickets in hand at the end, we could capitalise. It was not a wicket where you can walk in and play shots from the first ball,” he said.

“I was trying to find my rhythm slowly and took some time to get my eye in. We know what our strengths are and we are learning every game. It was horrible (about wicket-keeping today), not used to these kind of tracks.” 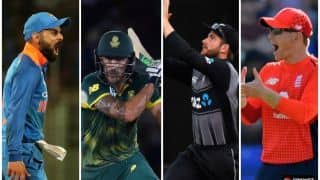