Rival captains Michael Clarke and Tillakaratne Dilshan blasted the dry wicket in Galle after Australia beat Sri Lanka by 125 runs in the first Test on Saturday. 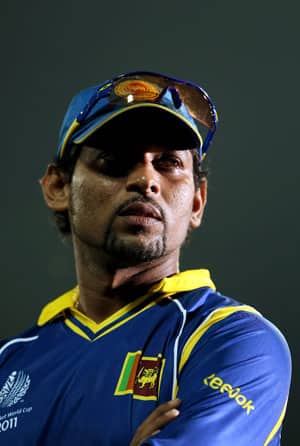 Rival captains Michael Clarke and Tillakaratne Dilshan blasted the dry wicket in Galle after Australia beat Sri Lanka by 125 runs in the first Test on Saturday.

Clarke, celebrating his first win as Australian captain, said he had never played on a tougher pitch than the dustbowl prepared at the Galle International Stadium.

“Day one felt like day five out there,” Clarke said after his team took the lead in the three-Test series, Australia’s first in Sri Lanka since 2004.

“I hate to see a Test match being determined by the toss. It was obviously prepared for their spin bowlers and that backfired. I guess I was just fortunate I won the toss.”

A disappointed Dilshan said he did not expect to play on such a dry surface.

“Usually, the wicket here is good for both the seamers and the spinners, but I think it was too dry and made batting difficult,” he said.

The Sri Lankan captain blamed the defeat on his team’s poor first innings total of 105 in reply to Australia’s 273.

The hosts, set a target of 379, then rode on a classy century from Mahela Jayawardene and 93 from Angelo Mathews to make 253 in the second knock.

“If there has to be one reason for the defeat, it must be our batting in the first innings when we managed only 105,” said Dilshan.

“If we had got about 250, as we should have, the story would have been different because we lost the match by 125 runs.”

Clarke said he was delighted at his first Test win as Australian captain, having lost to England by an innings in Sydney in January when he stood in for the injured Ricky Ponting.

“It was very special,” Clarke said. “We executed our plans well and played good positive cricket over the four days in conditions that were tough.

“We are number five in the Test rankings for a reason. We have a long way to go, but we are on the right track.”

Clarke said winning the first Test was not enough.

“We did not come here to win one Test,” he said. “We have to turn up again in the next game and start all over again.”

The emphatic win in Galle helped Ponting set a new benchmark of becoming the first cricketer to have been part of 100 Test victories.

The 36-year-old, the team’s frontline batsman, was already Test cricket’s most successful captain with 48 wins when he stepped down in April to make way for Clarke.

“His longevity in the game is amazing,” said Clarke. “For about eight or nine of our squad it was the first Test win, and here was Punter (Ponting) with his 100th.

Ponting will, however, miss the second Test in Pallekele from Setember 8 to go home for the birth of his second child, but is expected to return for the final match in Colombo from September 16.(AFP)

Dravid done in by 'hotspot' again