Chasing 170 for victory, the Zouks were dismissed for 152 in 19.4 overs despite a promising start by openers Andre Fletcher and Tamim Iqbal who put on 57 for the first wicket. Barbados made 169 for five in 20 overs, thanks to Kieron Pollard (78) and Shoaib Malik (61 not out).

Iqbal lost his composure, charged to Ashley Nurse and was promptly stumped by Umar Akmal when he had reached 22. The innings never regained full momentum despite a commanding knock of 57 by Andre Fletcher.

Pollard brought about his demise jumping high to complete a fascinating catch at mid on as he sought to send nurse over the top. His innings was laced with four fours and four sixes. Devon Smith (9), Misbah Ul-Haq 12 and Albie Morkel no score sunk in the middle of the innings leaving skipper Darren Sammy to struggle to increase the run rate.

He managed 35 off 16 deliveries with four fours and two sixes before being bowled by Jason Holder while attempting to swing to long on. Shane Shillingford, Garey Mathurin and Tino Best Best all followed and failed to score as the Zouks tried desperately to achieve their target.

Pollard had a fine all round game picking up three for 15 off 2.4 overs. Jason Holder, Ashley Nurse and Rayad Emrit all picked up two wickets.

Earlier in the evening Barbados Tridents won the toss, batted and got off to the worst possible start as the pugnacious Dwayne Smith edged the first ball of the match from Albie Morkel, to Andre Fletcher behind the stumps.

Jonathan carter and Malik then put on 30 for the second wicket until carter pulled Sammy to backward square and was caught by Devon Smith for 11. Shakib al Hasan became Sammy’s second victim, caught by Fletcher, standing up to the stumps for five.

Umar Akmal failed to score, caught by Sammy running around from first slip as Ukmal swept at Shane Shillingford. The Tridents by then had found themselves 48 for four in 7.2 overs. Tridents captain Pollard then joined Man of the Match Malik and the pair added 88 for the fifth wicket.

Malik, who struck eight fours and one six in his 51 ball knock entertained the huge Kensington Oval crowd with shots all around the ground. When on 68 he was bowled by a Nelon Pascal no ball, having previously struck a six and a four off the same bowler from his two previous deliveries.

After Malik went to a low running catch by Herschelle Gibbs off Tino Best, Pollard stepped up the tempo for the Tridents smashing an unbeaten 61 from 46 balls with four fours and three sixes, the final of which was a huge six over long on from the final delivery of the innings sent down by Best. Sammy was the leading wicket taker with two for 36. 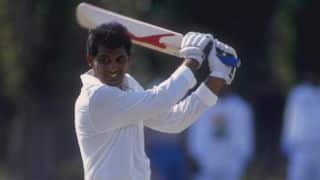