The CPL will the world's first major T20 league to be held since the coronavirus pandemic brought the game to a halt.

All the 162 members comprising players, support staff, match officials and administrators travelling to Trinidad and Tobago as part of the Caribbean Premier League (CPL) contingent tested negative for COVID-19.

According to a CPL media release, there were three players and one coach who have not been able to travel as a result of the stringent protocols to ensure the safety of the CPL cohort and the population of Trinidad & Tobago.

Every person was tested 72 hours before they travelled in order to ensure that all members of the party were travelling virus free.

One player based in Jamaica tested positive for COVID-19 and he had been training with two others so all three were withdrawn. One coach based in Australia also tested positive before he departed so he was not able to travel either.

The 162 people will now be kept in quarantine in the official hotel for 14 days during which time they will be tested regularly.

“If any member of the party is found to have contracted the virus they will be removed from the hotel and placed in further isolation in accordance with the current protocols in Trinidad & Tobago, but as of now all those who have arrived in Trinidad & Tobago are free from COVID-19,” the release said.

Michael Hall, Tournament Operations Director, said: “Our main priority is the health and well-being of all those involved in CPL and the wider population in the host country, to have got through this first step without any cases is encouraging news, but we will remain vigilant.”

The tournament gets underway on August 18 and will feature 33 games played at two venues in Trinidad. The first match will see last year’s runners-up, the Guyana Amazon Warriors take on the Trinbago Knight Riders. The final will take place on September 10.

This is the first time an Indian cricketer will be playing in the CPL.

Mumbai’s 48-year-old leg-spinner Pravin Tambe, who recently retired from all forms of domestic cricket, will be playing for TKR. 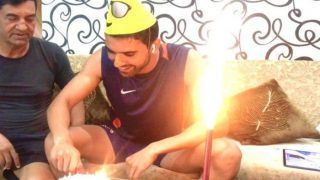 Deepak Chahar Celebrates 28th Birthday Ahead of IPL in UAE, Sister Malti Has a Message For Him | WATCH