Unbeaten tons by skipper Eoin Morgan (124 not out) and Ravi Bopara (101 not out) bailed England out of trouble to script a six–wicket win over Ireland at Malahide Tuesday. 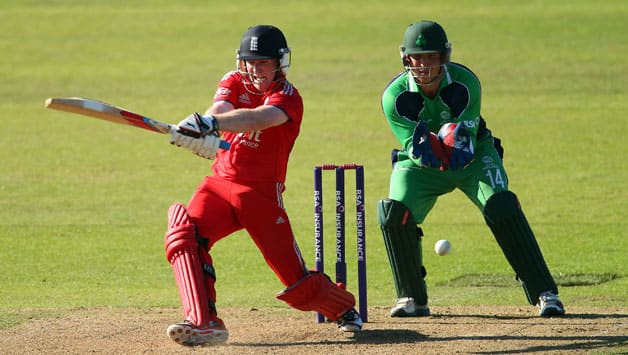 Unbeaten tons by skipper Eoin Morgan (124 not out) and Ravi Bopara (101 not out) bailed England out of trouble to script a six–wicket win over Ireland at Malahide Tuesday.

The duo scripted a record 226–run partnership that left the Irish bowlers shocked after they seemed to have had a firm grip on the match early on.

It was a skipper’s knock from Morgan ably supported by Bopara. It looked like yet another upset from the Irish side since the 2011 World Cup when England were four down for 48. However the sensational 226-run partnership powered England from a precarious situation to a comfortable victory.

Chasing a challenging target of 270, England’s innings couldn’t have gone more wayward, with Michael Carberry (10), Luke Wright (5), James Taylor (25) and Garry Ballance dismissed for a duck. With four wickets down with less than 50, it looked like Ireland were set to push the Morgan-led side out of the match. Tim Murtagh inflicted major damage upfront with three wickets.

From thereon, Morgan and Bopara batted sensibly to keep the run-rate in check and once the innings stabilised, the duo went after the ordinary Irish bowling and were at ease chasing the target.

Morgan completed his century similar to the way Porterfield did by hitting a six. Bopara though managed to reach his landmark maiden ODI ton towards the end of the match going after spinner George Dockrell in the 43rd over.

Mooney and Porterfield hit some quick runs before the skipper yorked himself off Rankin’s delivery. His 112-run innings included 14 fours and a six. Rankin then removed Mooney for 27. Coming over the wicket, Rankin pitched it up as the batsman was struck well in front of the stumps.

Trent Johnston and Max Sorensen then added some valuable runs for the side, taking the total past 250. Sorensen was more aggressive of the two scoring 24 off 17 balls.

The England pacers were well on target with Rankin being pick of the bowlers claiming four for 46. Steven Finn was accurate and went for 44 in his ten overs even though he didn’t bag any wickets.

The focus will now shift to the five-match ODI series beginning from Friday. England will surely have to regroup and assess the performance of the youngsters against the Aussies.