Hard-hitting, Thisara Perera couldn't last long as well as he was dismissed for a golden duck.

Sri Lanka, piling on the century of Mahela Jayawardene posted a total of 218 for the loss of nine wickets against New Zealand in the the first of the seven-match ODI series at the Hagley Oval in Christchurch on Sunday.

Sri Lanka winning the toss, elected to bat first on a relatively grassy surface that surprised a few and it proved to be costly as they lost two quick wickets in the opening 10 overs in the form of Dimuth Karunaratne and Kumar Sangakkara for five and four respectively by Adam Milne.

After a brief 35-run stand between Tillakaratne Dilshan and Jayawardene, Dilshan departed for 19 after being stumped by Luke Ronchi off Nathan McCullum. Followed him was skipper, Angelo Mathews for just 15 due to an unfortunate run out with 31 more added to the total. and the score read 82 for four.

It was then when Jayawardene and Lahiru Thirimane put up a 73-run stand for the fifth wicket that resulted in Jayawardene’s 77th ODI half-century. However, it was Thirimane who departed for 23 after a good partnership as Kane Williamson took a simple catch off Mitchell McClenaghan.

Out came Jeevan Mendis and there was a good 45-run stand as Jayawardene also scored his 18th ODI century before the two quickly fell to McClenaghan for 23 and 104 respectively. Hard-hitting, Thisara Perera couldn’t last long as well as he was dismissed for a golden duck.

The taileneders failed to contribute and kept falling at regular intervals as Sri Lanka finished on 218 at the end of 50 overs. 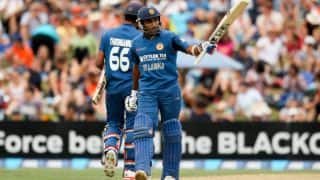