A BCCI functionary said that the duo's lack of knowledge, combined with an effort to cover-up what happened in the case of India opener Prithvi Shaw, led to the abysmal development.

After opposing the move to come under the National Anti-Doping Agency ((NADA) for years, the Board of Control for Cricket in India (BCCI) CEO Rahul Johri and GM of Cricket Operations Saba Karim on Friday met Sports Secretary Radheshyam Jhulaniya and NADA Director General Navin Agarwal and agreed to fall under the ambit of the anti-doping body. And if people within the board are to be believed, the duo have failed Indian cricket.

Speaking to IANS, a board functionary said that the least Johri and Karim could have done was to try and make Jhulaniya understand that the time wasn’t right to make a policy decision and even if they were being arm twisted as approvals for some future series weren’t being given, they should have stood their ground.

“Johri and Saba have failed Indian cricket in the NADA test. The excuse being given is the need to follow the law of the land. Surprising how there is a sudden feeling that it is important to follow that right away and people can’t even wait till the elections are conducted. If we could wait for so long, why not a few months more? We all know what is happening,” the BCCI functionary said.

Another functionary said that the duo’s lack of knowledge, combined with an effort to cover-up what happened in the case of India opener Prithvi Shaw, led to the abysmal development.

Two-Test old Shaw was recently handed a doping ban till November 15 for a doping violation in the 2018-19 domestic season.

“You need to do your homework. They needed to be aware of the WADA code, NADA code, be aware of the cases that have been detected in cricket over time and also how and why the BCCI didn’t wish to accept NADA for so long. But the duo didn’t have any knowledge. They were in sporting terms beaten left, right and centre.

“The case of Shaw was badly handled and this seems like a clear case to cover that up. It is very clear who were the people at fault when it came to the opener failing the dope test. And the blame clearly lies on the people who needed to divert the attention,” the functionary said.

ALSO READ: Search on for Hand of God as CoA passes buck in Shaw fiasco

“What did the duo get out of the whole meeting? If anyone was indeed arm twisting and not giving permission, they could have told the media the same and then they could have let justice prevail. This is clearly unfair on Indian cricket and the cricketers,” the functionary added.

Interestingly, Johri came out of the meeting and said that the clearance of tours was a separate issue which had nothing to do with coming under the ambit of NADA. 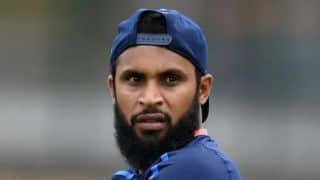