India Green won the match by 8 wickets after they electing to field.

India Green beat India Red by 8 wickets after they electing to field in their first game at the Holkar Stadium, Indore. Red openers Priya Punia (51) and Deepti Sharma (76) gave a good start to their team, adding 105 for the first wicket. Captain Mithali Raj fell a run short of her fifty. The first three batsmen added 176 in a total of 217. Green s captain Anuja Patil picked up two wickets for 42.

As in the previous match, the Red players fell prey to poor running. They lost two batters to run out (they had lost four last match.

Green batters then put up an opening stand of 139 runs. Jemimah Rodrigues, the young sensation, raced to 84. Devika Vaidya got out cheaply at 5 to Deepti. Anuja walked out at No. 4 and scored a quick 44 at a strike rate of 141 to mark Green s first victory in the tournament as Punam Raut, the other opener, remained unbeaten on 84. Deepti took both wickets for Reds.

At this point Mithali is the highest run-scorer in the tournament with 121 runs, but Red, her side, has been eliminated from the tournament. 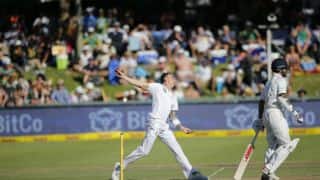